More Descartes! Seriously guys, this is the longest I've ever sustained a blog series. Are you having fun? Appreciating the chance to actually spend some time with one thinker, or are you bored and wanting me to move on already? Feedback welcome. F'real. Anyhoo, here's the third meditation neatly summarised for your philosophical pleasure:

Third Meditation Of God, that He exists.

So I've doubted everything except the fact that I exist. Now I'm going to try and lay aside everything except that one thing I'm certain of. I'll close my eyes, block my ears, and try to forget everything I've seen or heard or felt, and get to know this I that I'm so sure of. I am a thing that thinks. Can I be sure of anything else? There are lots of things that seem obvious and certain, but at the end of the day, I can never prove that they're real; I can never prove that I'm not just being messed with by an evil demon or a bad God.

So lets think about this idea of a bad God. I don't have any reason to believe that there's a God yet, let along a bad God. But I'll try to figure it out. I'll start by categorising the different 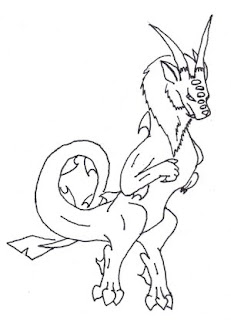 sorts of thoughts that I think. Some of my thoughts are ideas, images of things: I have the idea of a goat, a cake, a tree, a library. But other thoughts are actions of my mind which add something to those ideas: I want a goat, I'm afraid of the cake, I approve of the tree and I deny the library. These thoughts are volitions, affections and judgements. Ideas in themselves can't be true or false: when I think about a goat or a dragon-goat I really am thinking about them. It's only judgements that are the problem, when I think that the ideas I have bear some sort of relation to real things outside of my mind.

Now, the different ideas I have come from different places. Some I was born with, some came from experiences I've had, some I totally invented (like the goat-dragon: crazy, no?). Now, what is it that makes me think that some of my ideas correspond to things in the real world? First, some things just seem obviously true. But how can I be sure? Other things that I experience I obviously can't control myself, and that makes me think that they're real: fire burns me when I put my hand in it whether I want a burnt hand or not. But I can't be sure that that's not just the evil demon up to his tricks again. And even if the things I experience are real that doesn't mean my ideas correspond to what things are like: science shows that even though the sun doesn't look all that big, it's actually gi-freaking-normous.

But what about the idea I have of a good God who is eternal, infinite, omniscient, omnipotent, the creator of all things? Well, the cause of something must be at least as real as the thing it causes, right? So not only is it impossible for nothing to come from something, but it's not possible for something more perfect to come from something less perfect. That's true of ideas as well as things, and so the idea I have of God must have been caused by something at least as perfect as the idea and the idea is of something completely perfect in every way, so where could it have come from if not from a being that really is completely perfect in every way? Therefore, God exists, as demonstrated by the fact that the idea of God is the clearest, most distinct, most objectively real idea I have.

Besides, if God didn't exist, where did I come from? From myself? But then if I'd made myself, surely I'd have been smart enough to make myself so that I was sure of myself, was perfect, and had everything I wanted. From my parents or some other being less-perfect than God? But that just shifts the problem back a step: where did my parents come from? No, I must have been made by a perfect God, who placed the idea of God in me like the trademark a master craftsman stamps on his work. My nature could not be what it is; I could not have the idea of a perfect God which I do, if God did not exist. And if God is perfect, that implies that God is also good, and not some evil demon who has set out to convince me that the world is different to what it actually is. That's a relief.
Posted by Marika at 16:14

Great stuff, Marika! I've never posted before, but decided I needed to hear as you asked for feedback and I don't want to see this series go away yet! I love your 21st-century renditions of Descartes.

You know that I love your work, and that the current Descartes series is, of course, no exception. It's briliant, charming , sweet and funny as always.

Having said that, I must admit, that I particularly like it when you transalte a particularly dry, stodgy, and difficult thinker (Descartes doesn't really qualify as any of these) into breezy Marika prose a la the Luther series. So, do keep going with the Descartes, I'm just saying that I can't wait for your Hans Urs von Balthasar series, the Milbank/Rahner et cetera series, especially if you can keep the first person perspective, the asides, the examples...