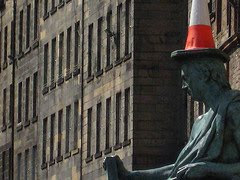 David Hume was one of the big names in early modern philosophy (that's the 17th - 18th centuries). He's basically an empiricist, which means he thinks we should only believe stuff we can prove. In his An Enquiry Concerning Human Understanding, he discusses what would happen if you tried to apply empiricist ideas to accounts of miracles.

He starts out slightly smugly,saying that he flatters himself that he's found a foolproof argument against the possibility of miracles. It goes like this: everything we know is based on our experience. Sometimes experience leads us to expect better weather in June than in December, but this is not always the case (you can tell he's Scottish). So we see things are more or less likely depending on how good the evidence is: it's pretty much certain that the sun will rise tomorrow, that the BBC weather forecast will be wrong, and that any film starring Jennifer Aniston will have a happy ending; it's possible but unlikely that a Hollywood marriage really will last till death do them part, that the winner of The X Factor will go on to have a long and successful career, or that Fox News will come out in favour of anything the Democrats say or do.

One of the main sources of the evidence we use for making these sorts of decisions is human testimony. We've found, over time, that people tell the truth more often than not, and that what we're told happened is usually more or less what really did happen (you can tell this was written in the days before Wikileaks and the Iraq war). Most people tell the truth, most of the time, because most people would be ashamed if they were caught in a lie. So when someone tells us that something happened, we weigh their account up against all of our previous experience, as well as any other eye-witness accounts, the reliability of the person who's telling the story, whether they look like they're mendacious or mental, etc. Some one you trust tells you your partner is cheating on you, you get suspicious; someone you trust tells you your partner is cheating on you with a time-travelling mermaid, you maybe want to ask a few more questions before you believe their story.

So what happens when someone tells you that they witnessed a miracle? For an event to be miraculous, it must (and watch out, because this is probably the bit where Hume's argument gets questionable) violate a law of nature. A law of nature is a rule we deduce where our experience tells us that something always happens, every single time, without exception. Stones always fall to the ground. The sun always rises. Dead people always stay dead. People can't walk through walls. People don't get instantly healed of leprosy. And Hume says that when someone tells us that a miracle happened, the only way we can believe that a law of nature was broken is if it would be more miraculous that the testimony we heard was false than if the miracle they report had actually happened.

Hume concludes that on this basis, we can never believe any eyewitness account of a miracle. There are loads of reasons why eyewitness accounts might be false: most of the stories we have of miracles are reported by people who were too uneducated, too barbarous, too sneaky and, let's face it, insufficiently white, male, British and rich to be trusted. Besides, it's a near-universal characteristic of human beings that we love a tall tale even if it's totally made up. We're so keen to believe ridiculous stories that we're quite prepared to overlook glaring inconsistencies and improbabilities in tales of giant squid, aliens, government conspiracies. Sometimes religious people don't really believe a story, but talk themselves into believing it, or just tell it even though they know it's a lie because they think it's the story of story people should believe. And everybody loves a good bit of gossip: there is no story that spreads more quickly than the idea that two people fancy each other: all they need to do is be seen together once, and within the hour the whole neighbourhood has already married them off in their heads. Besides, the more civilised we get, the less prone we are to believing fantastical tales: no educated person would believe these days that climate change isn't real, or that we didn't really land on the moon, or that homeopathy actually works. Oh. Wait.

So, in conclusion, the proof for a miracle could never be so sound, reliable and indisputable that it would be good enough to stake your life on. Miracles can never be the foundation for religious belief. We must conclude, Hume concludes, that not only was Christianity not founded in the midst of miracles, but that today it cannot be believed in without one.

You are so good at this; you should be a lecturer or something...

So would Hume see it as a miracle that there are any Christians left now? Or any faith, for that matter?

Hang on... you already answered that question in your last sentence - sorry.

So he does believe in miracles, because people genuinely believe in god. Right?

I think he's just being sarky, but I wouldn't swear to it.

My little sister just shouted 'Hume! He pisses me off!' apparently it has something to do with his dislike of Palian ideas and the teleological argument.