Kant doesn't care if you're happy 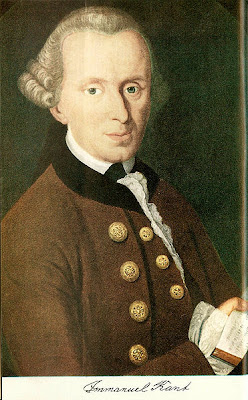 We've talked before about Kant's categorical imperative and his idea of duty. One of the reasons that he was so radical is that he disagreed with one of the central principles of classical philosophy: that there's a link between happiness and ethics: that the way of life which will make us really happy is also the way of life that's really ethical. It wasn't just that ethics won't make you happy, but that happiness actually got in the way of ethics: sure, you helped some old guy across the road, but if you did it even slightly to make yourself feel good, it's worthless as an ethical action. Did you play with your children? Fine, but if you did it because you like them, or, heaven help us, you enjoy playing games, you might as well not have bothered. The converse is that, however terrible the effects of your actions, as long as your motivations are right, you're good. Morality becomes radically interior: all about what's going on inside me, with very little interest in how what I do affects the world around me. On the plus side, Kant recognised that we were never going to become ethically perfect in his sense of the word: we'll never reach a point where all our actions are perfectly disinterested and entirely without selfish motivations. There are down sides, though: can you guess what they might be?

According to Matthew Sharpe, one of the less obvious problems with Kant's ethical system was pointed out by Max Horkheimer, a German philosopher and sociologist. He argued that the way Kant opposed duty and pleasure went along with the ideology of capitalism. By making morality all about our internal motivations, Kant shifts the focus away from questions of economics and sociology and makes it difficult to challenge existing systems. His internalisation of morality is a depoliticisation of ethics: I don't care what impact buying a banana has on people on the other side of the world, because I only care about why I bought the banana. I don't care about banker's bonuses, sweatshops, the class system, poverty or injustice because all I care about is me and my inner life. I think that I'm not interested in politics, but actually my moral code is deeply political because it actively discourages me from getting involved in politics.

Roland Boer wrote a great post recently about why ethics is always political. You should go read it.
Posted by Marika at 19:10

Love the content. Enjoy the unique perspective you bring. I have a blog myself and would love your thoughts on it:
www.theway-book.com/compass. On it, we focus on getting people activated in their walk with God through various posts and activities. Hope to hear from you and thanks again for the unique perspective