The escapades of Brother Juniper, since canonised, are related in The Little Flowers of Saint Francis, a popular account of the life of St. Francis of Assisi which is much less sappy than it sounds. Brother Juniper's a classic example of the saint who's either extremely holy or mentally ill; possibly both. Some of the stories about him have been cited as classic examples of autistic behaviour. One way or another, he's a legend. Let's start with a short one, but don't worry: there are plenty more.

Brother Juniper loved the poor so much that whenever he saw someone in need of clothes, he immediately took off his cloak to give it to them. After some time, and the loss of numerous cloaks, he was order 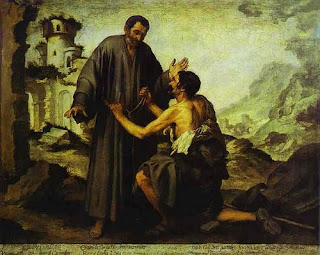 ed not to give away any more of his clothing.

'I'm afraid I don't have anything I could give you except this cloak, and my superior commanded me not to give it away to anyone.'

He thought a bit more.

'But I suppose if you were to just take it off me, I wouldn't put up a fight.'

Obligingly, the poor man stripped Brother Juniper of his robe, and he went back home. As Juniper's compassion grew, he gave away more and more: books, cloaks, whatever was left lying around: nothing was safe from Juniper's charitable impulses, and eventually the other monks made sure not to leave anything in the shared spaces of the monastery, because nothing was safe from Brother Juniper, who gave everything away for the love of God.
Posted by Marika at 17:26