Grace Jantzen was a feminist philosopher and theologian who died in 2006. In Power, Gender and Christian Mysticism, she discusses the contemporary idea that 'mysticism' is about personal emotional/psychological experience, and asks how mysticism has been understood at different points in Christian history, drawing on Foucault to look at the way that these different ideas have been tied up with the exercise of power within the church. 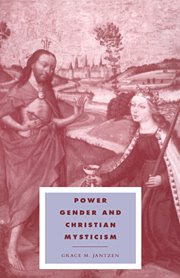 She argues that, early on in church history, 'mysticism' just referred to Greek mystery religions which were big on weird initiation rituals and secrecy. Like the Masons, basically, but with togas and maybe more animal sacrifice and/or temple prostitution. In this sense, mysticism wasn't about mysterious and incomprehensible ideas and experiences - the secrecy was necessary precisely because what happened was all too comprehensible (imagine how much mystique the Masons would lose if we knew they wandered round in silly aprons hitting each other with wooden paddles. Oh, wait).

This idea of mystics as people who kept their traps shut picked up from Plato the idea that mystics were people who attained knowledge of God by shutting off all their physical senses, so that real knowledge of God could be attained only by those who had detached themselves from physical concerns. As a result, 'mystical' came to mean knowledge which goes beyond normal human perception and understanding, and because men were considered to be less 'physical' than women, they were more able to be mystics in this sense.

This in turn got mixed up with early Christian theology, which had the idea that there were two levels of meaning in the Bible: the literal, historical meaning (e.g. 'The Song of Songs is about two people who want to have sex with each other. Soon.') and the spiritual, mystical sense ('The Song of Songs is about Christ's love for the Church [There are some brilliant 'mystical' interpretations of lines like 'Your breast are like leaping fawns.' I love you too, Jesus.]). The 'mystical' meaning of the Bible was its hidden depths of meaning rather than some intense emotional experience. Similarly with the sacraments: receiving communion 'mystically' wasn't a powerful psychological encounter with God, but was about precisely the fact that no such experience needed to take place for them to be effective. Again, men get to be the mystics, because women either weren't allowed to be educated in the mystical sense of things, or were refused the authority to teach or distribute the sacraments.

What then started to happen was the emergence of a new sort of 'mystical' knowledge. While women weren't allowed the education which would help them understand the mysteries of the Bible, what they could have were visions, which didn't depend on the education of the visionary. Hildegard of Bingen, an important medieval mystic, said that the reason God gave her visions was that men were too sinful, and so God turned to her as a last resort. More women started having visions, but the (male) church authorities were pretty suspicious, trying to clamp down by supervising female mystics and making sure they lived lives of seclusion and chastity, and then eventually starting to burn them as witches or 'false' mystics (Imagine how much more fun the contemporary charismatic movement would be with controls like this).

It was only when the secular state emerged, meaning that religious experience wasn't a source of power, that it became 'safe' for women to be allowed to be mystics. Mysticism was relegated to the sphere of the private and personal, which was also the woman's sphere, and it was only then that mystical experience came to be seen as 'indescribable.' This idea of mysticism as inexpressible conveniently meant that women were unable to speak about their experience. Sure ladies, you can have visions of God, but only because it doesn't matter any more and oh, by the way, don't go thinking you can tell us all about it.

All in all, Jantzen says, the ways that ideas of mysticism have been constructed at different points in history is closely bound up with issues of power and control, and this has often been male power and control directed at women. This makes me wonder about the way that prophecy and suchlike in charismatic churches fits into this account. Some similar dynamics at work, perhaps?
Posted by Marika at 16:26