A vision of Jesus 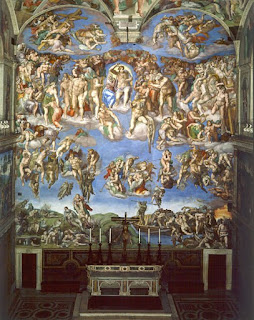 I've been reading some letters by Pseudo-Dionysius today. He's mostly famous for being an apophatic theologian, talking about the limitations of our language for naming God, and so a lot of modern discussion of him are all about abstract philosophical things. But reading his letters, a different side comes out. I'm going to tell you a story he tells, but first, a bit of context.

He's called 'Pseudo' Dionysius because he writes as those he's writing in the very early Church, the Greek convert mentioned in Acts 17:34, though actually he was probably writing in 5th century Syria. In Letter 8, he is apparently writing to Demophilus, a monk, and he tells Demophilus a story that was apparently told to him by a guy called Carpos who he met on Crete. Who knows, frankly, whether this story is true but just given a new historical context, or made up, but it's a good 'un so I think worth retelling regardless. The story goes like this.

Carpos was a very good man, who really knew God. Once, a man he knew tempted someone away from the church and into godlessness in the very days of his baptism which were supposed to be supremely joyful. Carpos intended to pray for them, asking God to draw them back with his goodness. His plan was to pray for this until he died or until they returned to the love of God. But instead, he found that he was angry and bitter. In this rotten mood, he went to bed, and slept fitfully until he woke up in the middle of the night, at the time he would normally wake up to praise God.

He started to pray, but boy, was he in a rotten mood. Instead of praying for salvation for the two men, he told God that it was wrong that they should even continue to live, and asked God to strike them down with a thunderbolt. As he prayed, the place he was in shook, and was split in half down the middle. A shining light appeared, and the heavens seemed to unfold, revealing Jesus in the midst of an angelic host. As Carpos looked down, he saw a great chasm. The two sinful men were at the edge of the chasm, starting to slip further into it. They were being attacked by serpents which tried to drag them down into the pit.

Carpos was overjoyed by what he saw, completely forgetting the vision of Jesus above him. He was impatient, seeing that the two men still hadn't fallen into the chasm, and tried, unsuccessfully, to help the serpents drag them down. Finally, he looked up again, and saw that Jesus had left his heavenly throne to offer a helping hand to the two struggling men, helped by the angels. He said to Carpos,

'So your hand is raised up and I am now the one you must hit. Here I am, ready once again to suffer for the salvation of man and I would very gladly endure it if in this way I could keep men from sin. Look to yourself. Maybe you should be living with the serpents in the pit rather than with God and with the good angels who are the friends of man.'