Human rights and the ten commandments 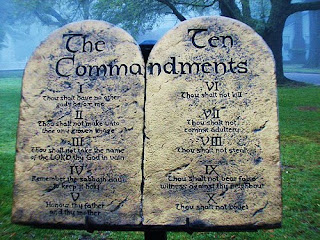 In his book, The Fragile Absolute: or, Why is the Christian legacy worth fighting for?, Slavoj Žižek argues that human rights are, essentially, 'rights to violate the ten commandments.' The right to privacy is the right to commit adultery in secret, where no one can see or judge (I guess you could also argue that it's the right to all the other sins that can be committed in the comfort of your own home). The right to pursue happiness and accumulate property is the right to steal (because, pace, Marx, property is theft, and most wealth is accumulated by exploiting other people). Freedom of expression is the right to bear false witness (and is interestingly at odds with the right to privacy, as the recent hoo-haa over Max Mosley's shenanigans illustrated). The right to carry weapons is (duh) the right to commit murder. It's not, says Žižek, that human rights actually encourage people to violate the Ten Commandments, more that they open up a space for people to do so without interference from the state. You may have noticed already, but some of those rights are quite US specific, which makes it interesting: how many of the people passionately attached to their right to bear arms are also the people who think that the US should be founded on the basis of the Ten Commandments? But it also raises interesting questions about the role of the law: how do you decide whether it's more important to stop people doing bad things than it is to allow them the freedom to make their own mistakes? 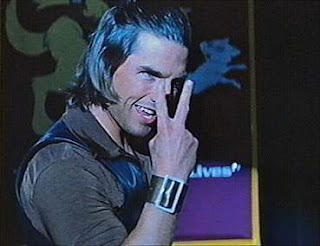 It's interesting how these sorts of narratives get translated into Christian culture: Wild at Heart is the obvious example, but Mark Driscoll's definitely in on it (in a much worse way), and I'm sure there are more examples. What would it look like if we let men be a bit more complicated than the Wild Man/Wimp dichotomy suggests? What's going on when we blame the 'feminisation' of culture for the decline of 'real men'? Answers on a postcard.
Posted by Marika at 15:11 3 comments: 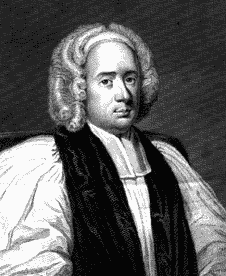 Joseph Butler was an 18th century Anglican bishop, who was, pleasingly, born in Wantage. He's not very famous these days, but apparently was quite important at the time, and influenced lots of people, including David Hume (philosopher man) and Adam Smith (capitalism's-his-fault-man). He's mostly known for his sermons, including the Fifteen Sermons Preached at the Rolls Chapel (which we shall, for pleasingness's sake, imagine to be a chapel full to the brim with different sorts of roll: bread, sausage, jam etc), and a book called Analogy of Religion, Natural and Revealed. He's not quite so boring as the titles of his books make him sound.

In the first of his fifteen sermons, Joe addresses Romans 12:4-5, which goes a little something like this:

For as we have many members in one body, and all members
have not the same office: so we, being many, are one body in
Christ, and every one members of one another.
He takes this to be referring not so much specifically to the relationship between individuals and the Church as to the relationship between individuals and human nature and human society in general. He thinks that what's good for the individual is the same as what's good for society, and that we're naturally disposed to doing good. Obviously, people are naturally disposed both to looking after themselves and to benevolence towards others, and these two instincts are complementary: self-love encourages us to behave well towards society, and vice versa. Various other human traits encourage us to love ourselves and to love others: our desire to be liked and respected by other people, our natural indignation when people behave badly and get away with it, our conscience, our desire to avoid disgrace, and our attraction to other people, as evidenced by the fact that even something as insignificant as being born in the same place or gone to the same school can form the basis of friendships even years after those things took place.

But don't we also have tendencies towards things that are bad for us and bad for society? Not exactly, says Butler. Sure, in pursuing our own satisfaction we may injure other people, but just as there is no such thing as self-hatred, neither does anyone really wish other people ill. No one really loves injustice, treachery, ingratitude etc. for themselves; only for the good things they can obtain for us. Sure, some people don't really like other people; some people don't even like themselves, but they're a minority and an aberration. Sure, sometimes people want things that aren't good for them or for society, but that's because they haven't thought carefully enough about what they want, and get carried away in the heat of the moment. We are naturally inclined towards what is best for us.

Quite apart from the pretty dodgy exegesis there, I don't think it's unreasonable to suggest that this is a rather optimistic account of human nature, and a rather glib dismissal of sin. It reminds me of a story that Žižek recounts, of a farmer "to whom an angel appeared and told him: 'I will grant you a wish, whatever you want - only, beware, I will do twice as much to your neighbour!' The farmer replied, with an evil smile: 'Take one of my eyes!'"
Posted by Marika at 20:59 3 comments: