Chesterton, inevitability, and the NHS

In his book on Eugenics (chill out, he thinks it's a Bad Thing, albeit for some slightly weird reasons), G K Chesterton, never a modest man, has a crack at identifying the overarching themes of different eras. The Middle Ages, was all about 'building and planning, dividing this from that by walls and fences'; the seventeenth century was about fear and panic, and the eighteenth century was all about 'tidying up'. He admits to being less confident in ascertaining the defining characteristic age, but goes on to suggest one regardless: inevitability. It used to be, he says, that as much political energy went into repealing laws as went into making them; now that's different, and once a law has been made we give it up for lost. People at the time were sad that universal education had been introduced (the horror!), and that America had been allowed its independence (the calamity!), but no one talked seriously about undoing what had been done, however vigorously they had campaigned against its being done in the first place. Chesterton argues that this sense of inevitability is to do with our corporate inability to admit mistakes. We would rather forget the past than admit we might have screwed it up. We no longer believe that we can change the past by rewriting history or the statute books, and so we just pretend it never happened.
I've been thinking about this in light of all the recent argy-bargy about the NHS bill (unlike universal education and the emancipation of the USA, this one is BAD). A lot of the force of the argument for opposing it has been that if we don't act now, it will be too late. And maybe that's true. There's certainly no sign that the railways will be unprivatised, even though 51% of people in Britain would support it and the whole thing is such a mess that surely even capitalists can't think it's worked out well for us. I can't remember the last time any significant bill was repealed. But why? Is Chesterton right? Or is there something else going on?
Posted by Marika at 09:52 No comments:

Feminism hasn't won until you stop throwing like a girl.

On International Women's Day, it seems appropriate to think about what it means to be a woman in our society. And for all the ways that women's status has changed, it's interesting that you can still, often, recognise a woman by the way that she moves. If I asked you to show me what 'throwing like a girl' looks like, you could probably give me a rough demonstration without having to think too hard about it.
In Throwing Like a Girl: A Phenomenology of Feminine Body Comportment, Motility and Spatiality, Iris Marion Young argues that looking at the different ways that men and women move can tell us a lot about the different status of men and women in society. She says that when men move, they tend to use their whole bodies, to move expansively, and to adopt open postures; women tend to use less of their bodies (they throw from the hand and the wrist rather from their shoulders), to move as if they're in a restricted space, and to adopt defensive postures. Men swing their books by their sides; women carry them in front of their chests, like a shield.
But the difference doesn't come from some mysterious feminine or masculine essence. Not all women throw like girls. It's a generally true phenomenon because of the way that women are generally socialised into seeing and being in our bodies. There's a fundamental contradiction in women's existence in patriarchal Western societies: on the one hand, as human beings we are autonomous and creative; but as women we are treated as objects rather than subjects, passive rather than active. And, Young argues, you can see this tension in the way that women move: our bodies are constantly stuck in the tension between transcendence and immanence.
We move as if the space available to us is restricted. In ball sports, we wait for the ball to come towards us and react to it; our movements are timid, uncertain, hesitant, we don't fully trust our bodies, and we focus on what our bodies are doing, rather than what we are trying to do with our bodies. We are taught to see our bodies as things, whereas men are taught to treat their bodies as capacities. Our bodies are burdens, which must be dragged along, protected and prettified. We move as though we are always being watched, wondering how we look to other people. We are encouraged to play quietly, and discouraged from risky physical activity, from sport, and from lifting heavy things, and so we underestimate our bodies' capacities. We are taught to see ourselves as fragile and delicate, and to treat our bodies not as extensions of ourselves and as ourr own power but as objects. It is more difficult to concentrate on the task at hand because we're constantly looking back on our bodies which we've been taught to see as things which are looked at and acted on rather than that which enables us to look and act. As a result, we're never fully in our bodies. We walk like girls, we throw like girls, we run like girls.
Photo credit: Macomb Paynes
Posted by Marika at 14:20 3 comments:

Andrew Shanks on Gillian Rose (or, Why Everybody Thinks Rowan Williams Is Wrong About Gay People) 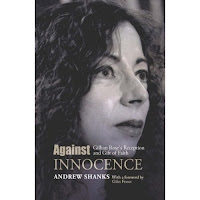 Gillian Rose was a secular Jewish philosopher who was baptised into the Anglican Church on her deathbed. A lot of her work was on Hegel, and like Hegel she is incredibly difficult to read and understand. So, as a preface to actually reading her work, I've been reading Andrew Shanks' book Against Innocence, which is about her work, particularly her ideas about ethics. Rose was also a good friend of Rowan Williams, who was very influenced by her thought, and in the book's foreword Giles Fraser points out that the book as a whole is constantly hinting at the connections between Rose's work and Williams' task in trying to hold together the Anglican Communion.

Shanks starts out by pointing out that Rose was dyslexic: reading was never easy for her, and she seems to have sought out difficult thinkers like Adorno and Hegel to study. She was also caught between secularism, Judaism and Christianity for most of her life, and her thought reflects this too: she is difficult to read, doesn't quite fit in with a lot of other contemporary philosophy, and is drawn to complicated tensions and ideas which open up conversations between those three positions.

Shanks' basic argument is that a key element to Rose's thought is the rejection of innocence. We all want to feel innocent; we all want to feel like we are in the right (and therefore that others are in the wrong). But the world is more complicated than that, and the only way to keep our hands clean is to disengage from the world. What Rose wants is an ethics of engagement with 'the broken middle': the messy, complex, compromising reality of the world. If we really want to engage ethically, politically, socially, we have to be prepared to compromise, to sacrifice our innocence and our desire to be right.

One of the things that happened in the 20th century was that philosophers were so traumatised by the terrible things that came out of Enlightenment rationalism (e.g. the Holocaust) and the Marxist dream of liberation (Stalin, Mao) that they became too afraid to offer political alternatives: what if it all went wrong again? Rose isn't satisfied by this: we can't just stop engaging with the world. But she argues that the problem with a lot of the utopian political movements of the 20th century such as Marxism or 'Orientalism' (all the different movements concerned with resisting Western cultural imperialism the civil rights movement, various national liberation movements etc.) rely on the solidarity of people who think that they are right and other people are in wrong; they are innocent and other people are guilty. What Rose wants instead is the 'solidarity of the shaken', communities bound together not by their shared innocence but by their shared acknowledgement of guilt. This, Shanks suggests, is why she eventually became a Christian.

If we want to occupy the 'broken middle', we can't do this by brushing over differences and disagreements, by pretending that they're not there or that they don't matter. Philosophy, for Rose, is all about recognising and identifying conflicts which are ignored or overlooked. But what we then need to do is to refuse to identify the different positions as 'guilty' or 'innocent'. To live in the middle is to experience the impossibility of reconciling different positions, to refuse to take sides and so to look guilty to everyone, to satisfy no one, to be torn apart. This, says Rose, is where the sacred is. In particular, the broken middle tries to mediate between 'the ethical', the collective tradition and culture of a particular community and 'self-expressive nonconformity': individuals who refuse to be bound by tradition or culture. For Rose, the two thinkers who are best at practising this philosophical mediation in the broken middle are Kierkegaard and Hegel.

The key virtue of the broken middle is anxiety. Anxiety comes from allowing ourselves to be unsettled by the way that 'self-expressive nonconformists' challenge our ideas and assumptions, bringing uncertainty and insecurity. But you can't properly experience this anxiety unless you are also bound up with the life of a particular community: it's easy to challenge everything you believe in if you have a group of friends who all think exactly the same as you. But to challenge everything whilst also remaining committed to a community of people who have very different and deeply held ideas is another thing altogether. Rose is very critical of people who maintain their innocence by refusing to belong to an institution. Let's take an example that I think Shanks is hinting at: it is easy to be a conservative Anglican who thinks that it's wrong to be gay. It's also easy to leave the Anglican church and be a liberal Christian who thinks it's ok to be gay. But to live in the broken middle is to commit to the Church as an institution made up of people who deeply believe that it's wrong to be gay, and also people who deeply believe that gay people should be treated the same as straight people, and to refuse to take sides, to open yourself up to the compelling arguments from both sides, and to be torn apart by that tension. Hmm, which Archbishop might be a good example of that?

Shanks' Rose is basically arguing for liberal pluralism at its best: not the multiculturalism that pretends we're all fine and agree and can get along, but the pluralism which recognises that different groups and individuals have fundamentally incompatible ideas about the way the world is, and tries to hold them together anyway. Churches can model this sort of approach, but not if they force everyone to agree or keep splintering off into sects where everyone agrees with everyone else, and not if the basis of their community is that they are right and everyone else is wrong.
Posted by Marika at 18:35 5 comments: