The Praxis of a Prophet; Or, Why Jesus probably did have a beard and carry a big stick

That's what prophets do, right? Although my great great great grandfather, a German Lutheran pastor, once wrote a theological treatise about beards and concluded that they were bad, not least because if you got the communion wine after lots of bearded people their dirty moustaches had made it taste sour. Did I tell that story already? It's really my only good theological ancestor story, so I wheel it out pretty regularly.

Anyway, chapter 5 of Jesus and the Victory of God. Wright points out the things that 'most everyone agrees on, whatever they think of Jesus: he was born about 4 BC, grew in the Galilean town of Nazareth, speaking Aramaic, some Hebrew, and probably at least a smattering of Greek. Around AD 28 he went public, and his work was originally connected with that of John the Baptist. He told everyone to repent, and announced the kingdom of Israel's god, telling a lot of parables along the way. He travelled round Galilean villages announcing his message and performing miracles like healings and exorcisms (obviously not everyone agrees they were miracles, but y'know, some stuff happened involving sick people), and ate dinner with all sorts of people. He had some followers, including 12 special disciples, and the things he said and did, especially one thing he did in the Temple, annoyed at least some other Jewish groups, particularly the high priests and their posse. Partly because of this, he got handed over to the Romans and crucified, which was what usually happened to insurrectionists (Pete Rollins, take note). But what does all this tell us about what Jesus was up to?
First-century Palestine was heaving at the cringes with a raggedy bunch of various types of prophet. Some prophets were powerful and educated, some hung around with weird sects, some had no friends, and some had huge gangs of followers. Some announced salvation; some announced impending doom. Some tried to lead uprisings against the Romans; others told people to get the hell out while they still could. Some were basically terrorists (and remember that a terrorist is basically just a violent person without any official power rather than a violent person with an army to command); others weren't violent at all.

John the baptist was one of many prophets. He was well-known in the late '20s, warning Israel of impending judgement, and getting into trouble for being a bit more political than King Herod felt comforable with. But he also baptised people for the forgiveness of sins, which implied that they didn't need the temple to have their sins forgiven; so the Temple authorities weren't fans either. Jesus clearly saw John as an important figure at the beginning of his own ministry. Jesus himself was like John the Baptist, only more so: announcing a prophetic message, inaugurating a renewal movement, and annoying the temple hierarchy.

At least at the start of his ministry, Jesus travelled around Galilean villages, avoiding the bigger towns and cities. He explained what he was doing in terms of the reconstitution of Israel. And since he went to lots of different villages, he probably said similar things in each of them; if he told a parable once, he probably told it several times, which Wright thinks goes some way to explain the variation between the different gospel accounts. The parables he told set out his agenda for Israel: what the convenant people should be doing at this point in their history. Jesus used parables because if he'd explicitly said what his parables implied, he would have gotten himself killed even earlier than he did. Jesus also warned of impending judgement that was coming on Israel if they didn't repent, threatening disaster and, specifically, the desctruction of the Temple. This isn't just ooby-dooby prediction, as if Jesus were a fortune teller: it didn't take a genius to see that if the people of Israel kept stepping on the Romans' toes, eventually there would be reprisals. Jesus also healed people, and his healings didn't just make people better, they also made unclean people clean, welcoming them back to full membership in God's people. And the nature miracles seem to hint at the idea that if Israel was restored, then the whole of creation would be restored along with her.
Posted by Marika at 14:59 2 comments:

Which cat is my neighbour? 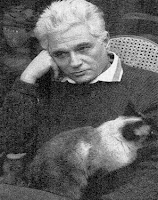 Jacques Derrida had a cat. It had a name, although that appears to be lost in the mists of history/Google. If anyone knows the name of Jacques Derrida's cat, please get in touch. I would like to know.

Derrida talked about his cat as a way of talking about the difference between animals and human beings. But it also came up in a discussion he had with John Milbank about the perennial question: 'Who is my neighbour?' Derrida argues both that perfect justice is impossible and also that we ought to aim for it anyway. We are always falling short. Milbank suggests that the problem with this is that there's no way of choosing between the competing demands on us. "Nothing has more weight than anything else." Why should I feed this cat when there are thousands of starving cats all over the world with no one to feed them? For Milbank, traditional Christian theology gives us permission to treat some cats as more important than others. It's not just that it's ok to feed one cat and not the others; we're morally obliged to feed our cat above other cats. Those who are closer to us have a greater demand on us than those who are further away. The idea that I'm responsible for every cat assumes that I live in a society which has broken down, where if I don't look after the cat, no one will. And who wants an ethics based on social breakdown?

Derrida responds: it's not that nothing has more weight than anything else, it's that no one has more weight than anything else. Of course we feed our cat and not all the other cats. Of course we prefer our cat to the cat next door; of course I prefer my family to others. But our preferences should worry us. If everybody only looked after those who were closest to us, "it would be the ruin of ethics". I can't feed every cat, but I shouldn't have a good conscience about all the other cats who have no one to feed them.
Which cat is my neighbour? If I had to pick, I'd go with Derrida (though I'm also struggling with the question: What Would Žižek Think?). You?
Posted by Marika at 17:29 12 comments: