How (not) to dismantle a heretic

In his Letters, (Pseudo-)Dionysius the Areopogite writes about how best to handle heresy. Writing at a time (late 5th-early 6th) century when there were plenty of heresies around to take a pop at if you felt like letting of rhetorical steam, he warns against thinking that oppo 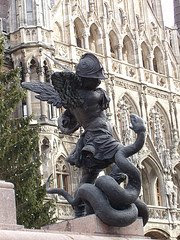 sing heresies puts you in the right. Just because you're denouncing a heresy, he says in Letter 6, doesn't mean that you're A-OK: what if both you and the heretics have missed the really important truths? Just because a thing isn't red doesn't mean it's white; just because someone else is wrong doesn't necessarily make you right.

Dionysius goes on to say in Letter 7 that he personally has never spoken out against heretics - as far as he's concerned, he wants to get on with proclaiming the truth as best he can, trusting that God will ultimately vindicate those who speak truly about him. Unfortunately, he then spends the rest of the letter explaining exactly why his old pagan friend Apollophones - who's taken to attacking him recently - is right and he's wrong, but it's a lovely idea, no?

Photo credit: access.denied on Flickr
Posted by Marika at 12:38