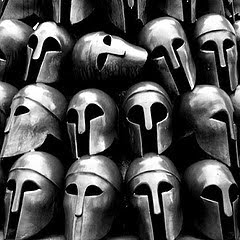 Why is war bad? Not, according to Augustine, because it involves people dying: they'd die anyway, so suck it up and stop being so chicken. No, "the real evils in war are violence, revengeful cruelty, fierce and implacable enmity, wild resistance, and the lust of power”, and often the reason people go to war in the first place is precisely to stop other people who are being cruel, violent, and lusting after power (a variation on the argument that it was ok to go to war with Germany/Iraq because Hitler/Saddam were such baddies). That's why, when Jesus and John the Baptist met soldiers, they didn't tell them to give up their soldiering: they recognised that what they were doing was lawful and meant to defend public safety. What really matters, according to Augustine, are the reasons people have for going to war. It's all about the heart-attitude, although because leaders only have power if God allows it, it's even ok to go to war for an ungodly king (and presumably for one whose heart attitude was less-than-perfect): he wouldn't still be king if his ungodliness was if God wasn't ok with him being king, he wouldn't still be wearing the crown that allows him to despatch soldiers. When Jesus tells us to 'turn the other cheek' he's talking about an inward disposition, not bodily actions. Even though the kingdom of God is not of this world, when Jesus-loving armies go to war and kick pagan ass, it totally resounds to the glory of God.

Task for you, dear readers: can you spot the holes in these arguments?

it is not possible to rely on fact "what was given, was given by God" because if we would do so, all things around us (good or bad) would be taken as they are and nobody would want to change them, as they were given. The problem is that it is not God who decides which king was/is made king with God's will (Augustine uses a word "ungodliness") but it is human who decides so. I think in Augustine's thesis the Ten Commandments should be included to cover holes in arguments.

All authority is given by God and should prima facie be respected.

Government is responsible to protect society from external violence, amongst other things.

In some cases this protection of society will require the use of military force.

Therefore governments may sometimes rightly require citizens to take up arms, and Christians should share in this task.

That is not to say that all military conflict is justified, but I don't see how to be a Christian pacifist without denying the injunction to submit to earthly authority.