Capitalism as a religion 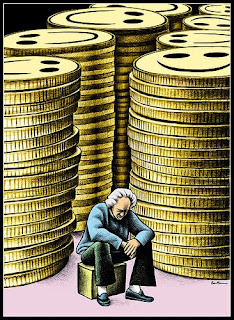 In Capitalism as Religion, Walter Benjamin argues that capitalism is, essentially, a religion, serving to 'satisfy the same worries, anguish, and disquiet formerly answered by so-called religion.' As such, it has four key features:
- First, capitalism is a pure religious cult, more extreme than any religion before it. In the capitalist religion, everything has meaning only in relation to the cult: theology isn't a separate discipline, making space for other areas of knowledge. In the religion of capitalism, everything is spiritual (Rob Bell would love that).
- Second, capitalism isn't like other cultic religions where there are special feast days when you're expected to rock up to the temple, sacrifice some goats, sleep with some prostitutes, all that malarky. It's much more demanding than that: in capitalism, every day is the Sabbath; every day we must go to church.
- Third, where other religions are all about repentance, capitalism is all about blame. It is so suffused with blame, so entirely without any idea of repentance or salvation, that even God becomes guilty. The great hope of capitalism isn't a new heaven and a new earth, but obliteration.
- Fourth, capitalism hides its God.
Benjamin argues that, as a religion, capitalism is entirely parasitic on Christianity. We look to banknotes for glimpses of the spirit instead of to icons; we worry about money instead of feeling guilt for our sins; instead of pagans or heathens or atheists we have benefit cheats for enemies.
Picture credit: Ben Heine
Posted by Marika at 16:22

'Modern subjectivity turns out belatedly to be subjection to capital' - I'm reading about contemporary photography but this phrase seemed relevant to your discussion. V good writing as always Marika.

I realize this comment is 2 years late, but I wonder how socialism is any different. It seems most comparisons made here would also apply to any aspect of a worldview when that aspect is placed ahead of God.

It's a fair point, though I guess you could perhaps just say that any worldview is religious. I wonder if Benjamin's response would be something to do with ideology: that capitalism is ideological in a way that socialism isn't. If the god of capitalism is money, what would the god of socialism be?