Karl Rahner on Theology and Anthropology 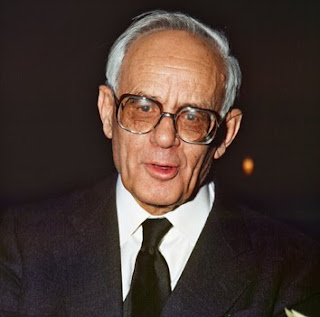 First, a nice little Rahner story. Karl Rahner was a German, wrote his theology in German and, like so many German academic theologians, had a reputation for being a bit obscure and difficult to read. Someone once asked his brother Hugo, a Jesuit theologian what he would be doing in his retirement, and he replied that he though he would try to translate his brother's works...into German.

Anyway, in an article called Theology and Anthropology Rahner argues that theology and anthropology always go together: we can’t say anything about God without also saying something about human beings, and vice versa; the same applies to Christology: we can’t understand what it meant for Jesus to be fully God and fully human without understanding what it means to be human and what it means to be God. But it’s not just any old anthropology we need – none of your studies of monkeys – what we need, Rahner thinks, is a transcendental anthropology. Don’t worry, I’ll explain.

First, some Latin: a priori means ‘what is before’, and in this context it means’ ‘before experience’. An a priori investigation of the world means looking at what we can work out about the world from reason alone, without having to rely on our experience of what the world is actually like. An a posteriori or ‘what is after’approach is based on experience. Transcendental investigations are all about the a priori: they’re all about what it means to know or experience the world. To do theology as transcendental anthropology means asking ‘What is it about this particular doctrine that means that human beings can know it?’ For example, human beings can know about God because human nature is orientated to God. Still with me? Let’s try an example.

Angelology is the study of angels. Angelololologists take the things the Bible says about angels and come up with a whole set of ideas about angels. Sometimes they’ll divide angels up into different types of angel, or they’ll talk about what angels are and how they’re different from humans or plants or animals (no one has ever actually discussed how many could fit on the head of a pin – sorry!) You might well ask what on earth all of this has to do with us, and the question a transcendental theological anthropology will ask is: What is it about human beings’ understanding of themselves that angelology expresses? It assumes that everything God has revealed tells us something about what it means to be human. So a transcendental anthropological angelology might look not for taxonomy of angelic types, but for what the relationship between humans and angels is.

First, because every sort of knowledge inevitably raises questions about the person who’s doing the knowing. Some sorts of studies can ignore these questions and get away with it, but theology and philosophy can’t, because they’re asking questions about the whole of reality, and not only is the knowing subject is part of that reality, but if we’re trying to understand everything we need to think about the limits of our ability to understand things. Not only that, but all theology is fundamentally concerned with what it means to be saved, and salvation is essentially about the people who are being saved, so any theology inevitably is about those people.

Second,you might ask why, if transcendental anthropology is so crucial to theology, the Church has gotten along perfectly happily without it for so many years. Rahner makes two points: firstly, there’s a distinction between proclamation (the things the Church declares to be true and invites people to believe) and theology (serious reflection on these items of faith), although obviously they always overlap. Rahner argues that, however long the Church has been around, there are still plenty of things we just haven’t thought about very theologically – he gives eschatology and ecclesiology as two examples. Second, just because theologians haven’t consciously been doing transcendental anthropological theology (I’d abbreviate, but TAT sounds silly) doesn’t mean they haven’t been doing it at all. Rahner thinks you can find transcendental anthropological theological approaches at least as far back as Thomas Aquinas. In addition, whatever the history, a transcendental anthropological theological approach is necessary now. We can’t pretend that modern philosophy didn’t happen, and the modern philosophy of Descartes, Kant, phenomenology, existentialism etc. demands a theological response. This modern philosophy is all about producing a transcendental philosophy of the autonomous subject, which is unChristian insofar as it suggests we don’t need God, and Christian insofar as it recognises that human beings aren’t just one thing in the world, but the beings on whom the fate of the whole cosmos depends. If Christianity is to be persuasive to modern people, we have to engage with transcendental anthropology.

Third, we need a transcendental anthropological theological approach because we need to make Christianity credible to modern people. There are plenty of Christian doctrines that seem dangerous, implausible, or just plain bizarre to people who have grown up outside the church, but if we can start to show how, say, the doctrine of the Trinity affects our ideas of what it means to be human, we can make Christianity that bit more plausible.

Photo credit: Ħarsa fil-Għajn on Flickr
Posted by Marika at 10:14

Thank you for this article. Really helpt me :)

this was a great article, clarified so much information for me, thank you