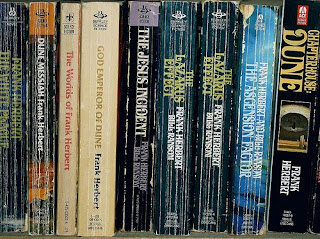 Still on our journey through Genette's elements of narrative, we'll finish up by a quick look at frequency and voice, and think a bit about why we should care how narratives are constructed.

Voice is about the point from which the story is told. Most narratives are subsequent to the story, but some are simultaneous (live blogging, for example), and narratives which predict what is going to happen are prior. The narrator might be inside or outside the story; and they may or may not be a character in the story. The narrator might point out connections between different elements of their story, or explain the significance of particular bits of it, and they might have a whole range of different reasons for telling their story.

Why should we care? If you remember, all of this comes from Gerard Loughlin's book Telling God's Story, which is all about what it means to treat the Bible as the story of God's work in the work. If it's a story, rather than just an instruction manual or a love letter or a rule book, then when we're reading it it's worth thinking about how the story is being told. Why are there four gospels? What does that do to the story of Jesus that's being presented? How does it affect the story if we decide to keep the Apocrypha (the set of books set in the bit of time between the end of the Old Testament and the beginning of the New) or chuck it out? Why do particular stories miss bits out, or tell bits more than once? If we are going to hear the story of the Bible and take it seriously, we need to be able to think about narrative

sounds like a fun book, Marika. remember I did a chunk of my PhD on voice theory and theology? I think you would enjoy Frederik Ruf's Entangled Voices

Thank you for the series. I waited for the serialization to end and read all three yesterday.

A Biblical example of an iterative frequency. Maybe the Genesis 6 story of the Nephilim.

All very interesting and so on, but what.happened.to..the.SOCK!?!?

I want a repeating narrative, not a singulative... :)

The Ruf sounds really interesting, Maggi - I'll keep an eye out for it.

Sorry to leave you hanging Mal. I found the sock eventually, but it was too late: I'd already thrown the other one away. I'm probably a better person for it, though: what is life without a little tragedy every now and then?