Sociology after the Holocaust 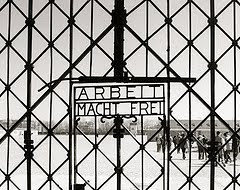 Zygmunt Bauman's paper 'Sociology after the Holocaust' isn't theology perzackly, but it's a powerful articulation of some of the enormous questions that the incomprehensible horrors of the Holocaust raise for pretty much every sort of knowledge. It was written in 1988, and Bauman's basic claim is that sociology relies on an account of human history which says that we all started out as rude, violent, barbarians, but are slowly being made better and nicer by the process of civilisation, so bad things that happen (like the Holocaust) are an aberration, a relapse to an earlier, nastier stage of the development of human culture. But Bauman thinks that the Holocaust shows up how inadequate this model is: the Holocaust wasn't an aberration but was, in all too many ways, a logical outcome of modern civilisation and the bureaucratic, rational state.

The Holocaust would have been impossible without the advancements of modern society. The systematic slaughtering of Jews and other outcasts was modelled on the factory system, producing death instead of goods. Without modern industrialisation and technological know-how it would have been impossible to kill so many people so efficiently. The sociologist Max Weber talked about modernity in terms of 'modern bureaucracy, rational spirit, principle of efficiency, scientific mentality, relegation of values to the realm of subjectivity': all of these characteristics were present in the Holocaust. Bauman argues that the Holocaust is a significant and reliable test of the hidden possibilities of modern society. Not only is it a powerful reminder of how ethically blind the bureaucratic pursuit of efficiency is, but the Final Solution itself was an outcome of the bureaucratic culture.

No one set out to make the Holocaust happen: it arose from a series of rational decisions about the most effective way to meet the basic objective of getting rid of the Jews. Originally, the plan was just to force German Jews to leave Germany, but as Germany conquered more and more of Europe, there were more and more Jews to get rid of, and this became impractical. Next, the plan was to designate 'Jewish principality', a giant ghetto in Poland, but the bureaucracy in charge of this area didn't want to take responsibility … Eventually, physical extermination was chosen as the most effective means to the original end. Plenty of genocides have taken place without the aid of bureaucracy, but only in a bureaucratic culture could the Holocaust come to seem the most 'reasonable' solution.

The Holocaust wasn't carried out by crazy or unusually violent people. The SS deliberately tried to ensure that those responsible for the actual killings were not especially eager, emotional or ideologically zealous. They wanted the task to be as business-like and impersonal as possible (this was the motivation for abandoning shooting in favour of the more clinical gas chambers as the primary means of killing).

Herbert C. Kelman has identified three conditions which encourage the erosion of moral inhibitions against violent atrocities: the authorisation of violence, the routinisation of actions, and the dehumanisation of victims. Bauman points out that the first two are classic characteristics of modern institutions. Max Weber, writing before the Holocaust, says that 'The honour of a civil servant is vested in his ability to execute conscientiously the order of superior authorities, exactly as if the order agreed with his own conviction. This holds even if the order seems wrong to him.' People stop worrying about what the 'right' thing to do is because the right thing is always to do what you're told: discipline is substituted for moral responsibility. In addition, the Final Solution was so effectively implemented because it was broken up into so many routine tasks: this person drove the trains; this person operated the signals; this person herded the Jews into the chambers; this person pressed the button to release the gas. Not only thousands of Germans but most of the Jewish victims of the Holocaust co-operated with the bureaucratic processes of the SS.

But the third condition, dehumanisation, is the most sinister of all. Most of those who enabled the Holocaust never even realised that their actions had moral implications: all they did was gather statistics, coordinate logistics, and liaise with community leaders and generals. It didn't seem like there was much of a causal connection between what they did and the reality of mass murder. John Lachs argues that the mediation of action is one of the most salient features of modern society: the person doing the act thinks that the responsibility lies with the person who told them to do it; the person who told them to do it has no tangible idea of what it is that they've ordered. The increase in distance between the act and its consequences makes it very difficult for us to give it moral significance, just as for us buying a pair of trainers seems to have very little relation to the reality of sweatshops on the other side of the world.

What the Holocaust tells us, says Bauman, is that it isn't enough to explain violence as a remnant of our distant past when we were uncivilised and barbaric. The Holocaust was not abnormal as we would like to think; it is not so far away from us as we would hope; it is all to possible that such a thing might happen again. The civilising process doesn't simply make us better, kinder people: it also involves the separation of violence from questions of morality, and screens off ethics from questions about the most rational solution. The Holocaust was a legitimate outcome of the civilising tendency; Holocaust-like events are a constant potential of the sort of society we live in. Sociology (and theology, and every other subject) needs to deal with this issue, needs to recognise that the Holocaust makes its normal criteria for good practice problematic. It was sociologists and anthropologists who conducted research into the genetic differences between Aryans and Jews, and they weren't, by the standards sociology sets itself, bad sociologists. They were part of the same system that we were part of, and they had all too many of the same values as us.