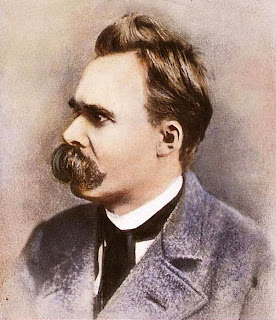 In Beyond Good and Evil, Nietzsche argues that the idea of philosophical objectivity is a myth. We don't start with logic and argue to conclusions, he says: we start with value judgements, deeply held instincts about the sort of life that is worth living, instincts that are bound up with our physiology, literally gut feelings. When we do philosophy, we're not really trying to find the truth, we're just trying to justify our heart's desire. All the great works of philosophy are just a sort of personal memoir.

Isn't there anyone who is capable of the disinterested pursuit of truth? Sure, says says Nietzsche:maybe that's the case with jobsworthy academics who don't care if they're studying the history of stamps or the workings of the brain, because they're only really interested academic study for the money and the prestige that it brings. If you want to find a genuinely objective seeker after truth, go to someone who just wants to be distinguished but doesn't really care whether they get there by studying mushrooms or teapots. But philosophy is always personal.
Posted by Marika at 10:07