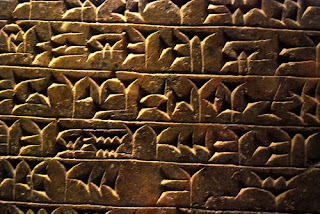 I've blogged in the past about the accessibility of academic theology (those posts are tagged with 'Bad Writing' if you want to check them out or revisit them), and it's a topic I keep returning to. In the past, I've always taken the side of accessibility over obscurity, but I'm starting to think that it's a bit more complicated than that (isn't it always?) I'm planning to blog some thoughts from Iris Murdoch and from Hegel over the next couple of weeks, but thought I'd start off by pointing you in the direction of a few online things I've read recently that have got me thinking again.
First, a lovely post from Maggi Dawn, talking about why she thinks it's worth doing theology in public, arguing that it's as much about theology's need to remain connected as it is about everyone else's need to do theology:

'Nothing stands still, and if theology is to remain alive it needs to remain in the public sphere, not locked away in a museum. Theology is much more interesting done in a broad context; it saves it from the angels-on-a-pinhead stuff, and from disappearing down rabbit holes that are really not that important. But what I fear to some extent is that Christian theology is becoming more and more privatised, and the gap between those who are totally inside it and totally alienated from it is widening. And we really shouldn’t let that happen.'

Second, an article in the Guardian by Nick Cohen, arguing that the arts need to get better at communicating if they want to persuade the public that it's worth fighting to save them from the cuts. He makes some important points, but I think he's also way harsh:

'For all the leftish positioning of "transgressive" academics they have been naive to the point of stupidity about the right. They assumed that Conservatives did not mean what they said and would not take money from institutions which have gone out of their way to alienate the intellectually curious. People write well when they have something say. The willingness of too many academics to write badly has told their fellow citizens that they are not worth listening to or fighting for.'

So there are some anti-difficult writing thoughts. I'm going to blog some about the other side of the argument, but I'll leave you with a point made by one of the reviewers who recently rejected an article I wrote in which I critiqued Judith Butler for her obscurity: they pointed out that, for all that everyone talks about how difficult she is, she has changed the world: lots of her ideas are just taken for granted now by people who think about and read about and blog about and live in gay or queer culture; her discussion of the social construction of gender has been so influential that even right wing conservative fundamentalist Christians are starting to use it to argue that gayness is a social construction and therefore curable. And if they can get their heads round Judith, well...
Photo credit: voyageAnatolia
Posted by Marika at 15:24

I agree with you on bad writing in academia. So a personal question: who are you favorite theologians who write clearly?

Perhaps tellingly, a lot of the theologians I have loved for their clear expositions are also theologians I am now bored of or frustrated by because I find them too simplistic. I have, at various points in my love, loved C S Lewis, Francis Schaeffer, Tom Wright, and Roger Forster; but I find them all pretty limited now, or just plain wrong.