On the Absence and Unknowability of God 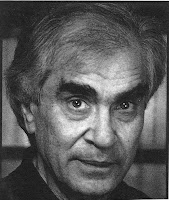 One of the weird things about Western theology is how completely it ignores the existence of Orthodox Church. People often talk about the difference between Catholics and Protestants as though they're the only sort of Christians. The Orthodox have various responses to this oversight on our part: sometimes they ignore us right back, sometimes they take revenge by arguing that everything that is wrong with the world is the fault of the West.

Christos Yannaras is one of the people we perhaps shouldn't ignore. In the Orthodox Church he's like Rowan Williams crossed with Stanley Hauerwas crossed with John Milbank. Maybe. Andrew Louth says that he is 'without doubt the most important living Greek Orthodox theologian'. Bet you feel about about not having heard about him now, huh?

Yannars' On the Absence and Unknowability of God takes a classic contemporary Orthodox-theological approach: he highlights a problem in Western thought, explaining why it's the Catholics' fault, and argues that if we'd just stayed Orthodox everything would have been fine. In this case, the problem is the death of God. Nietzsche announced that God was dead, and he's sometimes blamed for the subsequent growth of atheism in the West. But Heidegger argues that it's not Nietzsche's fault: all he was doing was prophetically announcing the imminent failure of European metaphysics. He says that European thought has basically turned God into nothing more than an anchor for everything else: God is there so we can explain why the universe made sense, so we can say that there's some original source from which everything else comes. God is the answer which puts a stop to the endless question: but why? Eventually, the answer is 'Because God'. Why do we exist? Because God created us. How can we trust our reason? Because God is rational and God came first. As soon as we start to use God like that, there's always the possibility that someone will come along and prove that there isn't any guarantee that we're rational, and so the whole idea of God will collapse, which is roughly what Yannaras thinks has happened in the West.

Apophatic theology, in this God-logic, ends up being part of the problem. If we can never fully understand the rational principle (God) on which everything else depends, we can start asking questions. We get skeptical, we get agnostic and then, bang! All of a sudden, we've become Richard Dawkins. But for Yannaras, God was never meant to be an axiom, a first principle, a logical necessity. We have a relationship with God, who loves us, and apophatic theology isn't meant to be about a logical incomprehensibility at the foundation of all being, it's meant to be about the fact that we can never fully articulate our experience of loving and being loved by God.
So for Yannaras, Heidegger and Nietzsche aren't atheists exactly, but point us towards a better, more plausible idea of God. Instead of thinking they understand what God is and how he caused everything, they leave God's place empty. God isn't dead, God is absent or unknowable. To think about how we come to know God, Yannaras uses the Eastern distinction between God's energies and God's essence. God's essence is, er, the essence of God, God in Godself. God's energies are God's activities in the world, creating, redeeming, and all that shebang. We can know God's energies but not God's essence, so knowing God through the world is a bit like knowing Banksy only through his artwork, or knowing Salinger only through Catcher in the Rye. An artists' work can tell us a lot about the artist, but they can't tell us what the artist is like in themselves.

So apophatic theology for Yannaras is important for two reasons: firstly, because of the unbridgeable divide between God's essence and God's energies, which means we can never speak about God's essence; and secondly because language always falls short of the richness of relationships: with God, we can experience more than we can speak of.
Posted by Marika at 22:39

I'm concerned this might be a rather basic question, but what would it like to experience something we can't talk about in language? I mean, how would we know we were experiencing it if we couldn't describe it to ourselves in a way that individuated it from the whole mass of "unanalysed experience" like infrared rays, ultrasonic sounds, vague sense of angst and so on? Following Wittgenstein I can only make sense of an experience by being able to self-describe it through public language or, at a minimum, assimilate it through gesture, play etc and Yannaras seems to place it in the category of incommunicable mysticism, which in a Wittgensteinian paradigm makes it nothing at all. Some way of grounding these "experiences" in something we can communicate and learn seems essential - does he help do that at all?

If this is a frighteningly basic question, do give me a reading list....

It's not that Yannaras thinks we can't describe at all what it's like to encounter God or love a person or find music beautiful, it's that he thinks there is something about those experiences which exceeds the language we use to describe and differentiate them. Does that make sense?

Not quite sure I get what he's saying about apaphatic theology though. Seems like there are two ways in which God is said to be 'unknowable', and I don't quite get how they connect.

There is the essence/energies thing, the point that we know what God does in/around/with/to us, not 'Godself'.

Then there is the way that the experience (presumably of God's 'energies') exceeds language, but is still in some sense within the human world. And it almost sounds as though in this sense God's unknowability is similar to all experience, so that even the feeling of the breeze against my cheek is more than I can ever say. In other words, God is not unique in being unknowable, or exceeding the grasp of language, because that's just how things are anyway.

Is that about right?

What is the difference between the incomprehensibility and unknowability of God? Or is there one?

Stu, I think that there are two different things going on, two different reasons why we can't fully know God. I'm not quite sure how they connect either.

Jeremy, I think there is an important distinction between incomprehensibility and unknowability. Incomprehensibility suggests that we might be able to know something about God, but we can't fully comprehend the divine nature: we might get a bit of a grasp on God, but we can't grasp the whole of God. Unknowability suggests a more fundamental inability to know anything about God at all.

What does Yannaras say about the incarnation? Is Jesus in the same category as the other 'energies', or in any way a more direct revelation of God's essence? (I may have misunderstood the energies/essence distinction!) :)

That's an interesting question. I think that the incarnation would fall under energies rather than essence, but it makes way for us to participate in the divine nature so that, according to Yannaras, we exist as God but without having the same essence of God.

I promise I haven't just spent 5 weeks thinking this one up... though perhaps the discussion has moved on in my absence. I'm not quite sure what it would mean to say that an experience exceeds what we can describe, my problem is that I don't think we can know we are experiencing an, um, experience without being able to individuate it linguistically. It may be theoretically true that we are having an experience with elements that are beyond description, but we wouldn't know whether or not it was actually happening. I know that's kind of rehashing the "whereof we may not speak..." etc but I can't see a way past that kind of objection in this case.

I thought the idea of scripture being received as gift and "recycled" in praise of God, in your next post, was a better way of looking beyond that which can be captured in solely propositional language, and exploring the nature of relating to God. Perhaps it's because that idea undoes some of the enlightenment abuses of language but still allows us to talk, in language we inhabit and understand, about what we are doing as we approach the divine (or perhaps, with fairly equal probability, I've misunderstood what's going on there too).

I know what you mean, but I also feel like it's almost a truism to say that we have feelings we can't put into words: we just can't describe how awesome or how awful something was, or the particularly quality of the sadness we're feeling, and sometimes someone puts into words something we've experienced but never verbalised.

Hi Im Eastern Orthodox (from the Greek branch) --just wanted to say I'm not ignoring you! I am reading your blog and enjoying it.