A theology of breastfeeding

Two months later, we finally have the internet in our house. Woop!

And what better way to re-start blogging than with a post about boobs? Boobs boobs boobs boobs boobs. Ah, that's better. They are, in case you hadn't noticed, political, especially when they're involved in the rearing of children. Does bottle feeding your baby mean you're a slave of capitalism? Does breastfeeding limit your ability to take equal place with men in the world of work? Or does it mean that you've been sucked into unhealthy ideals of the 'perfect 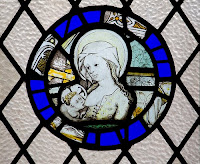 mother', who is always implicitly white – might bottle feeding be a form of resistance to racist ideals of what it means to be a good mother? Whenever you read about breastfeeding though, it's almost always portrayed as a decision made by the mother as an individual. Does breast or bottle feeding make that individual woman a good or a bad mother?

Rachel Muers' article 'The Ethics of Breast Feeding' asks, what if motherhood is about a more complex set of relationships? What if the decisions mums make about how they feed their babies are about the networks of relationships to which they belong? What if the role of children within breastfeeding isn't simply passive? What if the Christian images of breastfeeding used to talk about the way that we learn from and are nourished by God or by other people gives us a more complicated model of what it means to feed and be fed?

We sometimes talk as though the role of the mother is to protect her child from every bad thing in the world. But vulnerability can be a strength: mothers pass on their acquired immunities to their children, and through the imperfect shield of their mother's body, a child slowly becomes acclimatised to their environment. But the vulnerability of mothers also means that bad things get passed on: HIV/AIDS, poor nourishment.

What, asks Muers, might a feminist theological ethics of breast-feeding or infant feeding look like? Mothers know how hard it is to ignore their babies' cries; they learn how much human beings depend on one another and feed off one another. To think theologically about breastfeeding, says Muers, is to think about what it means to apply these lessons to thinking about all of the relationships that a mother and her child are involved in: with their immediate family, with their social context, and with God.