Prodigals, Paradigms, and Proof that Christianity was right all along 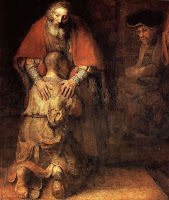 Wright starts off chapter four of Jesus and the Victory of God with a re-reading of the prodigal son. Really, he argues, it's a retelling of the story of Israel. The prodigal son is Israel, who went off into exile in a pagan country, ended up a slave, and then returned home. Wright says that lots of Jews in first-century Palestine thought that they were still spiritually in exile: sure, they were back in Israel, but under Roman rule. This wasn't what redemption looked like.
Wright says that the fundamental message of Jesus' ministry was this: Israel is being restored, but it doesn't look the way they expected it to look. It doesn't look like a new political order, kicking out the Romans and putting a new, properly Jewish king on the throne instead of the Romans' puppet rulers. It doesn't look like the restoration of the Temple to its former glory; actually it doesn't seem to involve the Temple at all. Instead, it looks like Jesus: a scruffy prophet from the countryside who hangs out with tax collectors and sinners. Don't like it? Fine, but that puts you on the side of the older son in the parable: the side of the Jews who didn't go into exile and resent the ones who return. It puts you on the side of the Samaritans. Jesus is the homecoming party, and everyone is invited to the feast. Jesus is the one through whom Israel's God is restoring his people.

a) Jesus made sense in the context of first century Judaism;
b) he thought he was regrouping Israel around himself, and that this regrouping of Israel really was the proper return from exile, and as such was a challenge to the Jews who thought that everything was focused on the temple;
c) these ideas were exactly the sort of thing you'd say if you wanted to make everyone hate you: the Pharisees, the Temple authorities, and the Romans;
d) but if Jesus had just been killed, that would have been it: he would have failed. Only if he was vindicated in some way would it make sense to think that he had been right all along and that the Gentiles should be welcomed into the kingdom;
e) if this is what happened, it would make sense for Luke to write the sort of gospel he did in fact write.
Posted by Marika at 08:47