He's got the whole world in his (invisible) hands 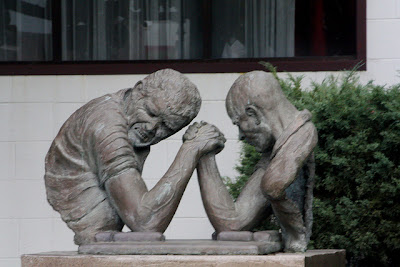 Chapter 2 of Theology and Social Theory is titled 'Political Economy as Theodicy and Agonistics'. Having dealt with some of the earliest 'political' thinkers – people like Hobbes, Locke, and Machiavelli – Milbank moves on to the thinkers of 'political economy', by which he seems (correct me if I'm wrong) to be primarily referring to 18th century political thinkers, primarily from Scotland or Great Britain more generally: Adam Smith, David Hume, James Stewart. These are the people who start to grapple with one of the fundamental problems of political philosophy: how it is that lots of individual people, acting apparently independently, give rise to a system which is ordered and regular: 'the market'. Faced with this problem, political economists drew on the theological notion of providence – the idea that God is at work in the world, making sure that everything that happens fits into the big Divine Plan for history.

Unlike Hobbes, the Scottish political theorists didn't assume that everyone acted purely selfishly; they included an account of virtue in their discussion of politics. But they didn't ground it in the traditional 'virtue ethics' idea that all human action should be directed towards some clearly defined notion of the human good. Hume argues that morality arises from our innate emotional responses to things like justice and injustice and our ability to empathise with other people. There's no agreed standard of goodness that we agree to work towards; instead, over time, political institutions emerge and slowly train us, like Pavlov's dogs, into having a conscience, a sense of right and wrong. Adam Smith doesn't think we rationally figure out that we'll be better off in a society where law and order is enforced; we get sucked into it because we're naturally inclined to be cross about injustice (and to not really care when people fail to be kind to one another as long as they don't break the law). There's a moral aspect to political life, but it's nothing to do with any absolute standards of good and bad, right and wrong, it's just that nature happens to have equipped us with certain 'moral emotions'. When these ideas about virtue are translated into politics, they tend to go in one of two directions:

Machiavellian Political Economy: Once upon a time, Milbank thinks, the aristocracy operated according to a strict code of aristocratic ethics: things like courage and magnanimity (ah, the good old days). But at some point there was a shift, and aristocratic honour was no longer about their adherence to a code of gentlemanly behaviour but became a sort of social capital that you could use to gain influence, wealth or property; that was all about reputation, appearances, and changing fashions. Machiavelli had a conundrum: he wanted to make sure that war was about countries rationally fighting with one another for sensible reasons, rather than internal conflicts for silly reasons like religion. But because Machiavelli also valued a particular sort of heroism, it was important for there to be some way for people to prove their heroism within their own country. The market was the perfect opportunity for people (well, men) to prove how noble and heroic they were without all the wastefulness of war. But war wasn't going to end: in fact, for many of the Scottish thinkers, the best thing about a market economy was the way it generated a surplus which could be used to build up the nation's military power. James Stewart talked about ancient Sparta as a model for the ideal society: a society divided between a slave class generating a surplus and another class of politician-warriors. And in the absence of slaves, the next best thing was wage-labourers, who could be progressively impoverished and disempowered until they were completely under the thumb of the state. This political philosophy laid the groundwork for the emergence of capitalism, but Milbank stresses that it didn't have to be this way. This Machiavellian version of political economy is, Milbank argues, neo-pagan: it basically celebrates the will to power that Christian theology rejected. Fair enough; but then, weirdly, he suggests that this somehow undermines secular reason's claims to autonomy. I mean, surely if you want to get away from Christian theology, it makes perfect sense to draw on pre-Christian political philosophy? Anyway, there was an alternative to this Machiavellian vision:

Providential political economy: This is was more explicitly theological, and, Milbank argues, basically a heretical theodicy (theodicy being the attempt to answer the question, 'How can there be a good God when there is so much evil in the world?'). Once you assume that people are basically acting independently and selfishly, unless you're an anarchist you have to identify some principle which means that society won't just descend into chaos. Welcome, Adam Smith's 'invisible hand of the market' theory. The providential political economists appeal to some figure of God or providence or nature, working away behind the scenes of history, making sure that everyone's selfish short term decisions are somehow worked into an effective society. Various people made various arguments about why things that look either selfish or actively bad – market behaviour, crime – all work together for the good of the whole. God/Nature has wisely made individuals self-interested in such a way that, by acting for themselves, they benefit everybody. And this idea of underlying omnipotent forces holding heterogeneous individuals together should, Milbank argues, make us question the whole idea of heterogeneous individuals: the idea that people make decisions without reference to the social whole is, he says, nonsensical. Individuals are inevitably shaped by the society in which they live; choice isn't a feature of isolated individuals but is deeply embedded in society. Next up, Milbank says, comes post-Malthusian political economy. Once providence gets into the game, ethics becomes less important: if everything fits together in a harmonious whole, then there's no need to worry about right and wrong because even the bad things are valuable. Malthus, who thinks that eventually humanity will run out of resources, says that if we didn't fear for our survival, there would be no incentive to virtue. Thomas Chalmers says that the distinctively Christian virtues aren't charity or forgiveness but the virtues associated with self-interest: sexual continence, sobriety, punctiliousness, discipline and Sabbath observance. He says that the market economy is great because it encourages us to nurture those virtues; which in turn providentially are precisely the virtues we need to sustain the market economy. Everyone wins!

Milbank, understandably, thinks that all of this – the Protestant work ethic, the market economy, the death of charity, the redefinition of virtue – is Very Bad. Unsurprisingly, thought, he wants to argue that the problem isn't secularism but bad theology. Sure, theology has screwed things up before, but Milbank's theology will save us.

Photo by prayerfriends.
Posted by Marika at 13:15

The old hexametre Verse Hexapla by Origenes seem to be The origin of 6
religions. Other roman not greek alike origenes as roman emperors and their theogonia, theogonius about rules of state church does seem tog havet The Whole world in his hands, strangly enough. In invisible hands too!