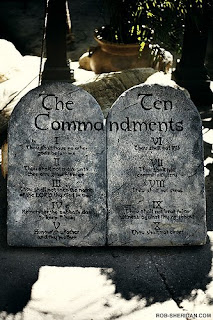 In his commentary on the eighth commandment, 'Thou shalt not bear false witness,' Luther argues that this doesn't just refer to lying in court, but is also about how we speak about our neighbours more generally. He says that a person's reputation is one of their most valuable possessions, so we shouldn't say things which damage other people's reputations. We shouldn't bitch about people behind their back; we shouldn't spread malicious rumours. So far, so obvious.

More interestingly, Luther goes on to argue that, just as we wear clothes which show off the 'honourable' bits of our body and cover up the 'dishonourable' bits (1 Corinthians 12:22-23 - my body's too dishonorabilicious for you, baby. Brings a whole new dimension to the question of what is signified by changing hemlines in fashion, I think: your thighs are so dishonorable this season, guys), we should treat our neighbour's reputations in the same way, always talking up their strengths, and putting the best construction on their actions. If we hear something bad about someone, we should think of the most charitable explanation, and believe that.

I came across this idea in a book by Eugene F. Rogers, called Sexuality and the Christian Body, in which he attempts to resolve the question of what Christians should think about homosexuality. He invokes this principle of Luther's as an important way of engaging in theological discussion: stop with the mudslinging, he says. How can we see what is good and important in the different positions people have taken on this issue? I love this as a principle not just for theology, but for reading and discussing generally. Dismissing someone as an idiot doesn't get us anywhere, however satisfying it might feel at the time. What's the best possible construction we can put on the things that are said and done by people we disagree with, whether they be theologians, politicians, philosophers etc?

Photo credit: Rob Sheridan on Flickr
Posted by Marika at 11:17

Good point about engaging rather than dismissing: it begs the question however, how does one deal with a vociferous critic who refuses to acknowledge your debate in this context? I'm thinking of Dawkins - how do you get beyond the fact that he won't listen to anyone talk about religion? I just want to call him an idiot (worse, actually) and move on, but what does that achieve? What would engaging achieve?

The nice thing about Richard Dawkins is, you don't actually have to engage with him at all. I have yet to have a conversation with anyone who has read and been persuaded by him, and have never read any of his books. We don't have to get into every discussion: we engage with the people we meet and the issues we think are important, and where we don't get involved in arguments, we probably don't have to worry too much about putting the best construction on our opponents' views. With Dawkins, I feel like there are more interesting discussions out there, and I choose to take part in those instead, though maybe if I had a friend who was a Dawkins-ite I'd have to rethink my position, which currently looks more like this: if you can't say anything nice, don't say anything at all.