Aquinas on the Four Senses of Scripture 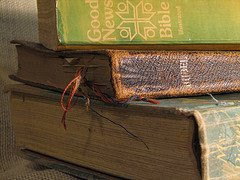 Traditionally, the Church has identified four levels of meaning or 'senses' of Scripture: the literal sense and three spiritual senses - the allegorical, the moral, and the anagogical senses. Aquinas explains these in his Summa Theologiae, in Article 10 of Question 1 in the Prima Pars:

Whether in Holy Scripture a word may have several senses?

Point: How confusing would that be? We'd all get confused and believe untrue things about God, and surely the Bible can't lead us into untruth, right?

On the other hand: Gregory the Great says that "Holy Writ, by the manner of its speech transcends every science, because in one and the same sentence, while it describes a fact, it reveals a mystery."

Reply: The author of Scripture is God, who is able to signify meaning with things as well as words, so some of the things described by the words of the Bible themselves point to other meanings. The historical or literal sense of Scripture is the obvious meaning, the things that the words directly point to, so when the Bible talks about rocks, the literal sense of its words are rocks: you know, those hard, stony things. But then there's also a threefold spiritual sense. When things in the Old Law signify things in the New Law, that's the allegorical sense: so when the Old Testament describes Moses hitting the rock and water flowing from it, that text refers literally to an actual rock, and allegorically to Jesus, from whom living water flows. Then when things symbolise what we ought to do, they are to be read in the moral sense: so when Jesus challenges anyone without sin to throw rocks at the woman caught in adultery, the moral or tropological sense is that we ought not to judge because we are sinful too. Finally, the anagogical sense is when the words of the Bible refer to our eternal glory, so when the Israelite prophets refer to the restoration of Jerusalem, the literal meaning is the actual city of Jerusalem, but the anagogical sense is the Kingdom of God.

Aquinas says that these four senses don't need to confuse us, because they're all based on the literal sense, and there isn't anything in the Bible which is there in the spiritual sense but not in the literal sense.

This division of the meaning of Scripture into several senses is pretty common from very early in the Church right up to the Reformation, after which it fell a bit out of favour, and everyone got very excited about reading the Bible literally or pulling it apart with 'scientific' historical criticism. It's been becoming more popular again recently, though, and however much people might talk about sticking to the literal sense of Scripture, it's rare to find anyone who completely avoids the other senses. I think we do several of these senses a lot in the charismatic church, particularly when reading the Old Testament or prophesying, but often people aren't that aware of what they're doing when they give, say, an allegorical reading of Scripture. I think it's worth being aware of because how we read the Bible matters, and how we understand what we're doing when we read the Bible affects both how we read it and how we assess other peoples' readings of it.

Photo credit: GeoWombats on Flickr
Posted by Marika at 14:43

Hi there, what a meaningful blog you have here!
Found you via Condron, where you ask for people to check you out - maybe you'll do the same for me though I am a light weight!
The difficulty as I see it in this 4fold approach, is on whose authority do we decide to say this is to be intrpreted on a moral/literal/etc level. If I inform my conscience and interpret in one way, am I wrong when more of an 'expert' or someone of a more literal or more charismatic tradition says, no, I think it's this way. Is there any one way? And if not, then every one is both right and wrong? You probably answered such questions in your first year of study - sorry!

I don't think it's a easy question at all, actually: I think that it's a question that theologians have been trying to answer since theology began, and haven't yet managed to settle! I guess I would see it like this: for every Christian, trying to live life in community as part of the body of Christ, there's a sense in which everything we do is biblical interpretation - everything we do says something about what it means for us to be part of the story of Jesus, which is the story of the whole world. And because each of us is in a different situation, part of different communities, for each of us that looks different. And none of us are perfect yet - we make mistakes, there are things we don't understand, we make bad decisions. And all of that is true of the way we read the Bible: we each filter it through our experiences, wisdom, sin and good qualities, and we're all learning and changing all the time. What if it's not so much about finding the 'right' answer as it is about becoming more who God made us to be, and exploring some of the richness of the possibilities that there are in Christ?

Which might mean that mistakes/sin become redemptive?
Would it be a pain to change your comment settings so that follow ups automatically notify the author?
Yeah, cheeky, I know!

It's funny you should ask that, as I'm currently waiting to hear whether I get funding for a PhD looking at the role of failure in coming to know God. I definitely think that God is big and gracious enough to redeem our failures.

In terms of the comments, I've tried to change the settings but it doesn't look like automatic notification is possible, unless you have any ideas how to do it?

Hey that's big Marika - very best of luck on the funding.
To change comment seting, go to dashboard, then settings, then comments, then on 'comment form placement' tick pop up window.
This will then give commenters the option of ticking the box to receive alerts that a post has been responded to.
Hope this is clear. So does this mean you are in your 3rd year and going to fund yourself for the doctorate?

I've changed the setting; hopefully it will work now!

I'm actually most of the way through an MA course at the minute. I'm hoping to get funding from the Arts and Humanities Research Council, who are the main funders of arts postgrad research in the UK, as I can't really afford to fund myself... Otherwise, will have to find some sort of alternative employment where my theology skills will come in useful. Hm. Might be tricky.

Settings work just fine - thankyou - should mean you have a faster turn round in the whole commenting process. Ooops, was getting my degrees tangled there.
Would have thought a uni would be interested in you lecturing, and of course there's always teaching!! And if you have the contacts, seminaries - few now as they are - might be intrested.
Who also might fund you, or some other RC body.
Have a good days study.MM