In 1999, Judith Butler won a Bad Writing Contest run by the journal Philosophy and Literature for this sentence:

The move from a structuralist account in which capital is understood to structure social relations in relatively homologous ways to a view of hegemony in which power relations are subject to repetition, convergence, and rearticulation brought the question of temporality into the thinking of structure, and marked a shift from a form of Althusserian theory that takes structural totalities as theoretical objects to one in which the insights into the contingent possibility of structure inaugurate a renewed conception of hegemony as bound up with the contingent sites and strategies of the rearticulation of power. 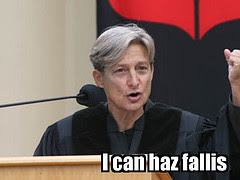 Butler is, I think, a pretty bad writer: convoluted, difficult to read, repetitive, all in all, HARD WORK. Interestingly, though, she did see fit to respond to her award in a surprisingly lucid article in the New York Times. Her argument went like this:

The role of scholars in the humanities is to 'question common sense, interrogate its tacit presumptions and provoke new ways of looking at a familiar world.' When scholars use language in unexpected and difficult ways, people who read what is written are forced to stop in their tracks and rethink ideas and worldviews that they've always taken for granted. Common sense often stops us rethinking these assumptions: common sense used to say it made sense for women to be denied the vote, for black people to be slaves to white people. The whole point of writing the sort of text that Butler writes is to challenge the stories we tell and the ordinary language we use, which stops us seeing the world differently.

I don't think I agree. Plenty of people have changed the way we see the world by using language simply and effectively; by telling surprising stories or using ordinary words in extraordinary contexts. Bad writing matters because it effectively walls off academia from the rest of the world, and allows people to think that what happens in universities doesn't matter. It does, not least because things that are thought in academic contexts go on to shape the world in subtle but profound ways. Part of my reason for writing this blog is, I think, to see whether it's possible to communicate difficult ideas in less difficult ways, though how successful I am is probably for you to say.

Photo credit: the Frankfurt School on Flickr. Remind me to tell you one day about the lesbian phallus (not as much fun as it sounds, I'm afraid).
Posted by Marika at 11:44

One of the oddest and scariest things that I can think of (something that I think deserves a paranormal explanation involving the Illuminati) is the way that people can respond to public philosophical provocations as if they're being served platitudes chips and gravy.

I'm sure, you've seen seen this sort of thing before. A talk on anything, no matter how wacky (say, on the late Lacan in his 'let's draw a matheme on the board phase') can still manage to get a lot of polite middle-class nods, and little chuckles as if the speaker had not said something manifestly INSANE, but had instead calmly repeated every over-represented received idea of the age in a series of cosy formulae: ('you're better than other people because you put dittoes around the word 'truth'/ a stitch in time saves nine/i guess it means whatever you want it to mean et cetera)

I mean, I've actually seen people come out of a lecture denouncing the idea of post-colonial studies as if the speaker had just given a robust defense of why post colonial studies rocked so very hard.

Given this, I think that no sane person can think that complex ideas require the simplest prose possible. I mean, given that people can find ways to not pay attention to what's being said even when someone writes as clearly and as well as you do, they can definitely find ways to ignore the content of the writings of someone as horrendously obscure as Butler at her worst.

I mean, what's the point of challenging common sense if no one can see that you're doing it?

At least with clear, simple prose you increase the chances that someone will think: "Oh, he's talking about the MEEK. How lovely."