Milbank and the problem of evil

John Milbank’s Being Reconciled is all about forgiveness, and the restoration of God’s generous relationship with the world. In it, he discusses the problem of evil. Traditionally, Christian theology has refused to see evil as a power or a thing in itself, arguing instead that it's a distortion, a parasite on the goodness of God’s creation, a falling away from life and from existence.

For Augustine, that means that free will isn’t about being able to choose between good and evil; it’s about being free to pursue God and to become uniquely ourselves whilst living a life of love. Sin isn’t about peopl 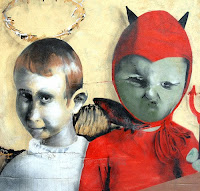 e using their free will to choose evil, because evil isn’t a ‘thing’ you can choose: it’s about people missing the mark, and rejecting God’s freely given grace. Evil doesn’t make any sense, and so Adam’s sin - the first sin that delivered us all into slavery, and means that we’re all born in a world where our ability to see God and to freely love him is broken – is a paradox. It’s hardly even worth trying to answer the question ‘Why did Adam sin?’ because the first sin simply makes no sense.

A similar view is that of Hannah Arendt, who talks about ‘the banality of evil’, by which she means that most people who do terrible things don’t set out to do those terrible things: they slide into it by making a whole series of bad but often pretty small decisions.

Some modern philosophers have blamed these views of evil for the terrible tragedies of the 20th century, particularly the Holocaust. They have argued it’s because Christian theology and the philosophy of people like Arendt made it impossible to see evil as a positive force, and to imagine that people would actively choose and pursue evil that Hitler wasn’t stopped. They advocate a view of ‘radical evil’: the idea that it’s possible to deliberately choose evil, to set out deliberately to commit genocide, and they say that without this sort of understanding of evil, the same terrible things will happen again because we won’t be able to stop them.

Milbank argues that they’re wrong: that it’s actually the idea of radical evil which made the Holocaust possible. He argues that what makes the horrors of the 20th century – the Holocaust, the Soviet gulags, the terrible things done as a result of US foreign policy and ‘liberal democracy’ - so terrible is that the law itself has been on the side of the mass murderers, and the resources of the State have been used to commit atrocities on a legal, organised, and bureaucratic basis. For this, he blames Kant.

For Kant, the goal of any particular moral action is irrelevant: all that matters is that it’s done out of duty, and that the principle it’s based on could be turned into a universal law. Lying to protect the Jews you’re hiding in your house is wrong, because if everyone lied all the time, where would we be? In this case, the right thing to do is to tell the truth, even if you know that the people you hand over will be killed in the gas chambers.

Kant won’t acknowledge that our will is broken: if something is the right thing to do, he thinks, it is possible. ‘Ought’ implies ‘can.’ He thinks that we go wrong when we give credence to the desires which arrive from our physical nature: when we act because we want to survive, because we love someone, because we are hungry, which is in contrast to the traditional Christian view, which says that, although our desires are all mixed up, there is something of God’s goodness and truth in them. Kant says that nothing in our experience of the world can teach us what is right, but then struggles to say how we can tell the difference between right and wrong. Worse, he thinks that evil is an inherent possibility of freedom. To be able to do the right thing is to be able to do the wrong thing, and so human autonomy necessarily implies the possibility of evil. Freedom comes first, before good and evil, and so good and evil are set up as equal and opposite positive choices. Freedom comes first, and so the ultimate value isn’t good or evil, but power. This view of freedom is problematic, to say the least: if freedom implies evil, how can it be possible to say that God, the source of freedom, is good?

Kant also argues that moral evil arises out of human community. Left on our own, to exercise our freedom, we are fine: in the context of relationships with other people, we get dragged into bad choices and our judgment is clouded. Ethics is all about doing your duty; none of this messy stuff about emotions. And because of his categorical imperative, it becomes impossible to resist something like the Nazi government. Would assassinating your leader work as a universal ethical principle? Hell, no? How about obedience regardless of your untrustworthy emotions? Hell, yeah. And that’s pretty much where Kant takes you, according to Milbank: the hell of the gas chambers.

All this, says Milbank, is the logical consequence of valuing human freedom above all else, and of making free choice, rather than goodness and love, the ultimate value. It takes you to the gas chambers; it takes you to the gulags; it takes you to to global devastation wreaked by unfettered capitalism and the ‘free’ market. Freedom to choose between good and evil is not freedom. Freedom is being able to love God, being able to do the good that we want to do but, in our slavery to sin, cannot; freedom is being free to enjoy the riches of God’s grace.

Funny, I was thinking just this morning that the identification of choice and freedom isn't particularly valid, and probably does a lot more harm than good.

The trouble is that when you redefine freedom as 'freedom to chose obedience' - which makes it, I suppose, agenthood - you're approaching slippery rhetorical ground. It's a very short step to 'freedom is slavery'. I don't think this is a valid connection, but I do wonder if Milbank addresses it anywhere.

I'm guessing he means things like Vietnam, Iraq (both times), all those CIA sponsored coups in Latin America, Guantamo (and all the less well known shady 'security' operations, extraordinary rendition, torture, the sweatshops, child labour, environmental degradation etc. resulting in part from America (and other capitalist countries) forcing the 'free' market onto less developed countries... Y'know. Stuff like that.