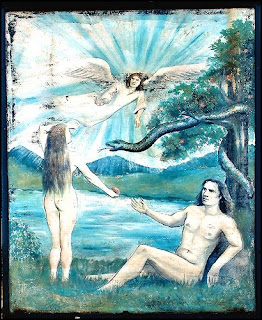 Tina Beattie is a Catholic feminist and has, accordingly, written a book called New Catholic Feminism. Can you guess what it's about?

A lot of 20th century Catholic theology defines femininity in terms of 'active reception', and takes Mary as its model for this femininity: she was impregnated with Christ, but chose to allow God to work in her, to give birth to God in her. Thanks to Catholic theologians like Henri de Lubac and Hans urs von Balthasar, Mary become increasingly understood as the model for the church: to be a Christian is to actively receive God, to give birth to God in ourselves, both as a community and as individuals.
You'd think that this might make it easier to argue for the ordination of women: if Mary is the archetypal Christian, the model for the Church and, as some argue, even the model for the priesthood itself, it surely shouldn't be so difficult to imagine women as priests, right? Wrong. The argument generally goes something along the lines of C S Lewis's: we are all female in relation to God. De Lubac argues that the priest represents God to the Church and the Church to God, but that his role is primarily defined by his representation of God to the Church, and so just as God is male to the Church's female, so the priesthood is male to the laity's female.
Tina Beattie points out that the problem here is not that Catholic theology is unable to conceive of femininity and to understand its role in salvation and creation; the problem is the inability to really conceive of masculinity in the created world. Masculinity is associated with transcendence, reason and God; femininity with immanence, humanity and the body, but the result is that the only 'man' in creation is the priest, who represents the masculine divinity of Christ, and all other men are feminised: the bride but never the bridegroom.
Photo credit: Lincolnian on Flickr
Posted by Marika at 17:33

very nice! i look forward to the discussion in class tomorrow!

Year ago, long before I had any real interest in Christianity (let alone theology) I remember reading C.S. Lewis's sci-fi trilogy. My least favourite line then (and I think now) came from a scene in the last book where his Messiah figure, Ransom, explains to a young sociologist why she should learn to 'submit' to her husband. This involved -- not only what I thought was an uninteresting deviation from the main ('we are in danger of turning human beings into mere 'standing reserve') plot, but also a cringe-worthily bizarre line about "a power so masculine that we were all feminine in relation to it."

As in the odd move that you discuss in your post, the logic of this was supposed to somehow leap from the idea that we were all the same sex (feminine) in relation to God to a thing about how women should obey their husbands (thus presumably avoiding scandalous things like wearing pants or studying sociology). Basically: if I thought the premise was dubious, the conclusion was completely mystifying.

It's really strange. I would have thought that the idea of the incarnation would have -- shattered -- the gender stereotypes that run behind this thinking. Surely the incarnation implies that God is not only transcendent, rational, 'masculine', but also immanent, corporeal, emotional 'feminine' (espeically insofar as he is also the Son) -- the nice things about having a Trinity is that you don't have to have a pantheon to incorporate all the aspects of reality.

Anyway: various Augustinian things are in my head about at this point: about god loving himself in loving love and therfore us loving god in loving someone else and through this thus loving love. Such things (from "The Trinity") all seem relevant here although I'd have to think more about it to make my argument, y'know, make sense.

But, anyway, with this kind of theology, couldn't we say that -- what with God being kinda obviously beyond masculine or feminine -- that we are all both masculine and feminine in relation to him (yeah I heard the pronoun) -- thus making the biological sex of the priest irrelevant?

Also, if we are talking about all things Catholic, I can't help thinking that the current Pope's emphasis on the importance of 'eros' (and not only on agape) in Christianity also suggests a break with the 'masculine=active, rational et cetera', feminine = passive thing...

I mean, doesn't an emphasis on eros suggest a rejection of the idea that the relation between human beings and God could be thought only in terms of the passivity of the believer ("feminine") vs. ultra-Masculine God by suggesting that we're NOT only humble Marian recipients of grace, but ALSO hungry Platonic philosophers climbing the ladder from the love of a particular thing to the love of love itself?

The big problem i see with society, but especially within Christianity today, is a focus on males being supreme and heterosexuality the norm. So, when you put the two together, it makes for one mighty dragon to slay! Then add the white and middle class component, and it is outright overwhelming!

THANKFULLY, within emergent/emerging church circles, women and queers have been screaming and are FINALLY being heard! Case in point, the Christianity 21 gathering in MN this past fall in Sept. is where 21 women, one queer, spoke. Women & queers were celebrated, embraced, put on a level playing field.

That was a very well put post Marika, I've spoken to several youngish Christian women and men about this, and yes, it is a picture of masculinity that is lacking. Helen Hills has a good article in the 2008 vol of Early Modern Women that relates in some way. x

I wonder if the conception of masculinity you use owes more to Plato, as Mal picks up, than it does to what I see in the Bible. (Of course you can't be held responsible for what I do or don't see in the Bible..) 'Masculinity' is about authority, not rationality or transcendence: and so men are masculinised in marriage. But Christ does still represent both sexes, since he 'became obedient to death'...'therefore God exalted him'.

Also, I'm not sure that I see ministers as priests who represent God to me, but as pastors: as in the CS Lewis quote, we are ALL female in relation to God. (...So men aren't necessarily more authorised in this regard).