Active vs contemplative: Round 3 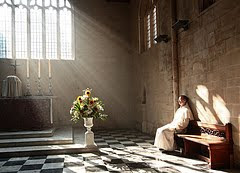 In an essay called 'Sacramental Flesh' (in Queer Theology), Elizabeth Stuart argues that, in ceasing to value monasticism, the Church has lost a valuable resource. She's mostly concerned with issues of gender and sexuality: she argues that, in being baptised, we enter into a community which is not primarily defined by categories of gender or sexuality (in Christ, there is neither male nor female...). To be a Christian is to be defined, first and foremost, not by how well we do or don't conform to social and cultural expectations of what it means to be male or female, but by our allegiance to Jesus. There's a lot that's wonderful in culture, and a lot that glorifies God; but it's all too easy to get so caught up in the cultures we belong to that we lose the ability to critique them, and start defining ourselves by our relationship to social norms rather than our relationship to God.

Stuart argues that earlier generations of Christians were better at subverting and challenging cultural norms of gender than we are. The celibacy of monks and nuns was a powerful reminder that heterosexuality, marriage, and family life are not the same as Christian discipleship, and that the deepest desires of human nature are not for other people but for God. The monastic life made space for us to imagine different models of community, family, and society.

This is, I think, the best argument for the contemplative life. It's true that you can contemplate and also have a family, a job, friends, and hobbies. But you can't do all of those things and also be radically disconnected from the culture of the place you live, and perhaps in this sense we'd do well for being a bit more culturally irrelevant. When you spend almost all of your time in prayer and contemplation, you have the opportunity to see the world around you in a radically different way to people who are busy working, socialising, raising a family or whatever else it may be. Monks and nuns aren't necessarily better people than the rest of us, but they have a very different relationship to society than we do. They're like the John the Baptist (or, as biblical scholars like to call him, JBap - rock), out in the desert, living off locusts and honey. They don't have anything to lose if they start questioning fashion, or TV, or politics. We're all tangled up in the world: we might not like the Tories, but maybe it would be nice to get their tax relief; we think celebrity culture's kind of stupid, but it's fun to read the magazines; we're influenced by adverts even if we don't realise it; we get our ideas of what's normal from the people we hang out with. Sometimes that's great: we understand the things that our friends struggle with, because we struggle with them too; we find God in the cracks of the pavements, the disposable culture, as well as in the Bible. But if we lose the weird hermits, the solitary contemplatives, the silent orders, the monastic retreat centres, the utterly unworldly types, we lose something valuable, and the Church loses some of its capacity for subversion, for seeing things differently, for grasping that we're both utterly at home in the world that God made and loves, and strangers in a strange land, longing for the return of Jesus and the transformation of all things.


Photo credit: Lawrence OP on Flickr
Posted by Marika at 17:07

Yes I love the idea of being irrelevant! ps - There's a lot about nuns subverting gender roles in stuff I've had to read on convent architecture and relics.

Just happened to be in the midst of reading about the early struggles of the Franciscans, in the first decades post-Francis, over this very issue.

The Spirituals came out on the losing end, though not so much because of their insistence on the contemplative vs. the active life, but more because of their Joaquinian (God save us!) insistence that utter subservience to Papal authority and established Church doctrine "wasn't all that". Yep, gets you labeled a heretic every time.

Perhaps unsurprisingly, the Franciscans ended up striking more of a balance between contemplation and action: one foot firmly in the hermitage and one out the door and into the world.

Similarly, the modern-day Cursillo renewal movement espouses a "tripod" of piety, study and action as the foundation of an effective Christian life. (A tripod being the sole platform that won't teeter and tip if its legs aren't precisely equal in length, or if the ground is somewhat rough.)

I agree with this notion. Prayer/meditation and study are the spiritual engines that engender and empower Christian action.

The modern saying is that we are God's eyes, ears, mouth, hands and feet in this world. James 1:27 adds: "Pure and lasting religion in the sight of God means caring for orphans and widows in their troubles, and refusing to let the world corrupt us." And again in 2:15-18, "If a brother or sister is poorly clothed and lacks daily food, and one of you says to them, Go in peace, keep warm and eat well,' but you do not give them what the body needs, what good is it? So also faith, if it does not have works, is dead by itself."

Please check out these related references on "flesh" (or the body altogether) and the various meanings associated with the body. Meanings by which we bind ourselves to fearful mortality.