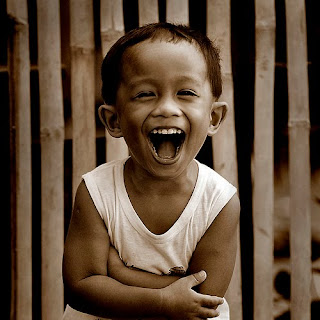 Why do we laugh? In Laughing Gods, Weeping Virgins: Laughter in the History of Religion, Ingvild Saelid Gilhus says that laughter is an extreme opening up of the body: we fling our arms wide with hilarity, open our mouths to guffaw. And because it's about opening up the body, it's connected with all the other things we do to open up or close off our bodies, which are often connected, in turn, to the ways we open up or close off our communities to outsiders. Laughter is about the boundaries between myself and other people; we laugh at the things that make us similar or make us different, about the rules we make to help us get along with other people, and about sex which is another sort of opening up of the body. We can use laughter to make people feel comfortable with us, or to shut them out. Gilhus argues that laughter's meaning falls into two main categories:

2) destruction and death, derision and shame, ridicule and blasphemy, tragedy.

There are, she says, three main theories about why we laugh:

i) The superiority theory thinks about laughter and power: laughter as a tool to make us important, to demonstrate that we are more powerful than other people; as a form of aggression.

"What do you tell a woman with two black eyes? Nothing, somebody already told her twice."

ii) The incongruity theory thinks that laughter is about the contrast between two different meanings.

"Two fish sitting in a tank. One says to the other: How d'you start this thing?"

iii) The relief theory thinks that laughter acts as a safety valve for society: we laugh about the things we usually try to keep locked up, prohibited. We laugh when somebody says the things that you can't say that!

(Lois walks in on Stewie torturing a bully)
Stewie: We're playing house...
Lois: But that kid is all tied up!
Stewie: Roman Polanski's house.

I love the idea of laughing as openness: as a form of love and hospitality. But maybe it's also a way of forcing open conversations and ways of seeing the world, of challenging the boundaries we put in place to keep us safe and stop us coming into uncomfortable proximity to other people. There's been plenty of media comment recently about comedians crossing the line from funny and edgy into offensive (Frankie Boyle, anyone?), and while sometimes I think it's about rightly objecting to cruelty, it's probably also about resistance to that forcing open of the comfortable little corners of the world that we inhabit.

Photo credit: hersley on Flickr.
Posted by Marika at 13:57

I like the typology you relate of essentially happy laughter and sad laughter.

But for me, madness and eroticism sit oddly in the first category (perhaps wisdom and sexuality as well).

And intoxicated laughter can be the most joyous thing in the world, or it can be shameful and ridiculous.

I also like the idea of laughter as openness because that is an attitude towards others: it is not defining the nature of the laugh by the emotion supposedly causing it.

That's interesting. I definitely think that it would be interesting to look at the relationship between the sort of jokes we tell and the other ways we understand and police the boundaries of our communities. And I wonder what you could infer from the different sort of jokes that individuals find funny?

The classic example is soviet jokes, which became a major social response to an impossible reality.