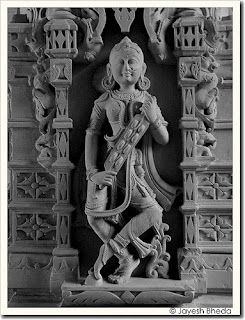 The book Ecology and religion: Ecological concepts in Hinduism, Buddhism, Jainism, Islam, Christianity and Sikhism is an impressive survey of ecological ideas from different religious perspectives, including, as the title suggests, some discussion of Jainism and ecology. Jainism, in case you never covered it in RE, is an Indian religion that's all about non-violence.

Shreeranjan Soorideva says that the principle of non-violence is the fundamental basis of Jaina culture, and Jaina scriptures totally forbid any kind of killing of living beings. Jaina culture divides all forms of life into four groups which are, in ascending order: 1) vegetable lives, 2) worm lives, 3) human lives and 4) liberated lives. When people do bad things, they accumulate 'karmic particles' which push them down the scale of life, and they have to work their way up by doing good deeds. Because plants are alive too, Jaina culture forbids even pruning or cutting plants. Only fruits that fall to the ground by themselves can be eaten. Tree worship is an important element of Jaina culture, and the banyam tree is considered to be especially holy.


Ashok Kumar Jain says that one of the five sins in Jainism is wanting to possess things that you don't need. He says that Sravaka and Sraviak Jains strictly obey six principles: 1) abstaining from alcohol, meat and honey; 2) not eating fruits; 3) not eating food at night; 4) praising five supreme souls; 5) compassion for all living beings; 6) drinking filtered water. As well as not being allowed to pick or damage plants, it's also forbidden to throw stones in the water or at any object, to dig land without a good reason for doing so, or to make fire (which makes me wonder whether it's rather easier being a Jain in India than in, say, the rather chillier England).

I tend to want to be funny as well as interesting when I blog, and there are lots of easy jokes you could make about such a strict set of rules for life. But I'm reluctant (or is it just that I can't think of any good jokes?). Anthony Paul Smith recently blogged about feeling frustrated that Christian environmental ethics don't really let ecology challenge theology: that Christian environmental ethicists just transpose their preexisting ethical ideas onto ecology, and never let their theology be changed or challenged by thinking about what it means to take care of the earth. People tend to have similar worries about academic books on Indian religions, arguing that academia is similarly unyielding, and just imposes Western (and usually Christian) ideas about religion onto very different cultures without ever letting those cultures challenge our categories. Seriously, what would it look like to take plants (and Jains) more seriously?