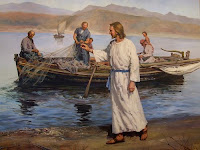 ...and I'm back. Did you miss me? I would have missed you, except I've been far too busy moving house (nightmarey), sunning myself in Menorca (sunburny), writing a paper (stressy) and partaking of family festivities (overeaty). But now I'm settled into my new house, with approximately 80% of boxes unpacked, and settling into a work routine, so I reckon it's time to start blogging again.

First up on the blog-to-do list is an article by Robert J. Myles. The article, called 'Dandy Discipleship: A Queering of Mark's Male Disciples' comes from the Journal of Men, Masculinities and Spirituality. Myles starts out by pointing out that we never come to the Bible blind: we always bring with us all the baggage of our expectations, beliefs, culture etc. Our reading of the Bible says as much about us as it does about the text. So if we want to find things in the Bible that challenge our expectations rather than just telling us what we already think we know, sometimes we need to deliberately go looking for them. If we want to challenge our ideas about sexuality and gender, we need to deliberately 'queer' the Biblical text, which means looking out for ways of reading it that don't just fit in with our ideas about men and women, gayness and straightness. So in his article, Myles offers a series of queer rereadings of sections of Mark's gospel that talk about Jesus' disciples.

While cruising the seashores of Galilee, Jesus began his ministry by fetching a number of seemingly attached men to join his cohort of male admirers. He saw Simon and his brother Andrew fishing in their boat, and as soon as Jesus invited them to accompany him in his quest to fish for more men, they dropped their rods and joined him. Shortly after, Jesus discovered James and John in their father’s boat mending their fishnets. Upon enticing them, they immediately left their father and their livelihood, to elope with the alluring Jesus.

The disciples quit their jobs. Our jobs tend to reflect our roles within society and within our families, not to mention our roles as men and women. Following Jesus, it would seem, challenges the social roles and relationships we're tangled up in. As societies, we tend to restrict male friendships to particular spaces: it's ok for men to hang out in pubs, at sports events, on fishing boats; but we're a bit freaked out by the idea that men might just spend time hanging out with each other, talking about deep and meaningful things. Isn't that a bit...gay? But what if following Jesus means spending time with other people in ways that aren't socially acceptable? What if we were to accept that some of the sorts of relationships God calls us to with other people are precisely that: a bit gay?

When they came to Capernaum Jesus asked his admirers, “What were you squabbling about on the way?” There was an embarrassing silence, for they had been comparing with one another to find out whose was the greatest. Jesus sat down, called his disciples, and said to them, “Whoever admires me the most will have the least, for truly I tell you, size doesn’t matter; it’s what you do with it that counts.” Taking a little one in his hand, he said to them, “Whoever is open to one such as this is also open to me, and whoever is open to me is open to the one who sent me.”

Immediately, Judas, one of the twelve, arrived; and with him there was a crowd of men with shackles and whips eager to restrain Jesus. The betrayer had said, “The one who I will kiss is the maledom; restrain him and lead him away.” When Judas came, he approached Jesus, said “master,” and pressed his lips up against him. Then the crowd laid their hands on Jesus and tied him down. After an initial struggle his admirers deserted him and fled. Shortly after, a boy escort wearing nothing but a cover of cloth was admiring Jesus. As the crowd of men tried to grapple him, however, he dropped it and streaked off naked.

Why, says Myles, do we assume that Judas' kiss is purely platonic? If it was Mary Magdalene kissing Jesus, there'd be a lot more nudging and winking (and the Dan Brownians would be wolf whistling their hearts out). Not only that, but who's the naked boy? The fact that his nudity's mentioned suggests to Myles that he might be a male prostitute (why would Jesus only hang out with female prostitutes?).

Conclusion
If we think there aren't any sexual undertones in the Bible, maybe it's because we're not looking hard enough. Maybe reading the Bible with dirtier minds would open up whole new levels of meaning, and whole new challenges to our ideas about sexuality, gender, and masculinity. This is especially important with Mark's gospel, which is often used to get ideas about what it means to follow Jesus. Why should Mark Driscoll get to decide what biblical manhood is like? If Myles is right, we need a whole new generation of biblical students with an eye for innuendo. Anyone feel called?

If you like this, Robert J. Myles' blog is here, and the full article is here. For the dirtiest mind in biblical studies, you could check out Roland Boer's blog, which covers biblical erotica, bestiality, and his campaign to get rude articles into respectable academic journals.
Photo credit: Travis S.
Posted by Marika at 14:02

Don't forget, we've also got some of Roland's biblical dirt at Journal of Men, Masculinities and Spirituality:
http://www.jmmsweb.org/issues/volume4/number1/pp19-31