Fifth Meditation Of the essence of material things and, again, of God, that He exists
Now, before I work out whether anything 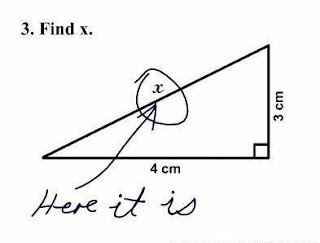 really exists outside of myself, I need to work out which ideas are clear in my mind and which are confused. I definitely have a clear idea of length, breadth, depth and time; and lots of mathematical concepts are obviously true: even if there weren't any real triangles in the world, the idea of a triangle is so clear in my mind that I can work out all sorts of things about how a triangle-that-may-or-may-not-exist would work, how its angles would add up, how a2+b2 would always equal c2, and all of this is so obvious that I can't just have made it up. And it can't just be an idea that I've got from seeing triangles in the real world: I can't picture a shape with a thousands sides in my mind, but I can still work out its mathematical properties. And if I can do all that, doesn't that mean that triangles must really exist? And if triangles really exist because I have such a clear idea of them in my head, then God must exist because I have an idea of God in my head that's at least as clear as my idea of a triangle. Look, I totally just proved the existence of God again. I am on FIRE.

Not only is the idea of God the most certain thought in my mind, but everything else I could think about depends on the idea I have of God, so if I can't know God I can't know anything else. Let me explain why. As long as I understand something clearly and distinctly I am sure it is true: in the moment where I really understand Pythagoras' theorem, I am absolutely certain that triangles exist. But then I go off and have my lunch, and then I see a cow in the street, and then before you know it I've totally lost my sense of the absolute certainty of Pythagoras'. If I can only be sure that things exist when I clearly and distinctly understand them, I'd be changing my mind all the time because there are only so many things I can think of at any one time, and as soon as I got distracted by a second thing, I'd totally stop believing that the first thing was true. But once I've grasped that God exists, I know that God isn't a deceiver, and so I can trust my past judgements even if I've lost my grasp on that moment where I really understood why the area of a circle is πr2. God acts as an anchor for everything else that I know and believe to be true. So, being sure of God means I can be sure of all sorts of things as long as I can think about them using pure maths. Now we're cooking with gas.