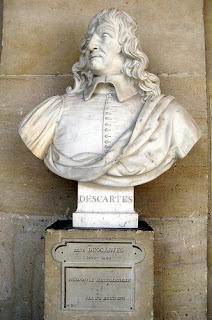 Regular readers of my blog may have noticed that I sometimes struggle to complete blog post serieses. Honestly, I just get bored or run out of steam or get distracted by something shiny, or...
BUT! I have a magical new solution to my series dilemma. This time, I have finished it before I started. That's right. I have pre-blogged a whole series, so we'll spend the next few weeks going through Descartes' magnum opus, the Meditations or, to give them their full name, the Meditations on the First Philosophy in Which the Existence of God and the Distinction between Mind and Body are Demonstrated. And that's just the title. We already met Descartes (link below in case you missed that post), so hopefully you feel you know him a little already. But helpfully, he also wrote a couple of letters of introduction to the Meditations, so we'll start there and then crack on with the first of the six Meditations next time.
To the most wise and illustrious the Dean and Doctors of the Sacred Faculty of Theology in Paris

When you understand what my little book is about, you'll be so convinced that it's brilliant that I'm sure you'll, y'know, tell all your friends about how great it is and make them all read it and agree that I'm a genius. Let me explain what it's all about.
There are several good reasons to talk about God and the soul from a philosophical rather than a theological perspective. First, we need to persuade the heathens to convert to Christianity, and you can hardly appeal to the authority of the Bible when you're talking to them, can you? Second, most people would do bad things if they thought they could get away with it: the only reason they don't is because they're scared of going to hell, so we need to persuade them that Christianity is true so everything doesn't go to crap. Also, you (oh, and the Bible) say that the truth about God is so obvious that atheists only have themselves to blame for their ignorance of God and so I thought it was worth trying to prove that, y'know, you and the Bible are right. Oh, and Pope Leo X has been encouraging Christian philosophers to prove that the soul really does exist, so I'm only doing what he suggested. And finally, most people who don't believe in God or don't believe that the body and soul are distinct say that no one's ever proved it, and although they're obviously wrong, I thought someone should prove it so convincingly that no one would ever not believe in God or the soul again. Oh, one last thing: people keep asking me to write all this stuff down because they've heard of all my snazzy new methods for finding stuff about.
So, part of my book is some arguments for the existence of God. They're not new, but I don't think it'd be boastful to say that no one has ever explained them as well as me, like, ever. They're still a bit complicated, but then even people who are too stupid to understand geometrical proofs still believe in geometry, so hey, worth a shot, right?

So, that's what my books about. And I thought that, you know, seeing as how everyone really respects you, I thought that if I sent it to you, you could make any changes you thought would make it clearer and then tell everyone to read it?

Preface to the Reader

Gee, thanks for reading my book. A couple of quick points: I decided to write it in Latin rather than French, because I thought that Latin would put off all the stupid people who wouldn't be able to understand it anyway. Also, some people have criticised my work, but they're all wrong and I'm right. But I didn't expect vulgar people to appreciate my work anyway. By the way, this book's not for the lighthearted: you have to be prepared to really meditate with me and let go of all your prejudices. Are you sure you're committed enough?
Coming up next time: The First Meditation
In case you missed it: Meet Descartes
Photo credit: wallyg
Posted by Marika at 10:25

what a great intro :)