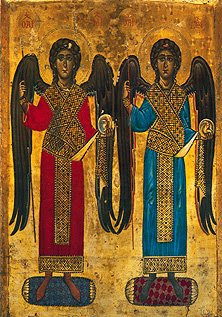 Rosemary A. Arthur says that in the intertestamental period – that’s the gap between the end of the Old Testament and the beginning of the New Testament, the way that the Jews saw God underwent a transformation, which correlated closely to the transformation of the political order they lived in. The kings in the Old Testament are a very human bunch. They screw up; they get angry; they fancy women; they go to the loo; they listened to women fighting over a baby; they asked for ornery shepherd boys to play them music. And their kingdoms were also pretty small: they were never that far away from the ordinary people. And the God of the Old Testament was similarly engaged. He showed up in bushes; he got people out of bed in the middle of the night; he threatened to go off in a huff because his people were disobedient; he talked about Israel as the beautiful woman he loved. He was right there, in the middle of history, talking to ordinary people, accessible.

But when the Israelites went into exile, they were caught up into far vaster empires with much more complicated bureaucracies, and layer after layer of civil servants. Alexander the Great was an almost mythical Emperor; his empire spanning continents, containing unimaginable numbers of people. And as the meaning of kingship and authority changed, so did the Jewish conception of God. Increasingly, God’s transcendence was emphasised, his utter apartness from ordinary human beings. And because he was so inaccessible and far away, there was a new need for something to bridge the gap between God an man. This is where the angels came in. Picking up some ideas from Babylon, Jewish thinkers slowly developed the idea of a hierarchy of angels mediating between God and man, much as the ranks of civil servants mediated between Alexander and ordinary people. All sorts of hierarchical schemes of angels were proposed, often corresponding pretty closely to the structure of contemporary royal courts. This idea of mediating angels got picked up by Neoplatonism, Gnosticism (an early Christian heresy), and early Christianity. It surfaces in Clement of Alexandria, Gregory of Nyssa, and Dionysius the Areopagite, to name but a few.

I think it’s interesting that a change in the structure of society was reflected in a change in ideas about God. I wonder how much that’s still the case. Hans Kung, a Catholic theologian (though not one very popular with the present Pope), argued that, as the infallibility and authority of the Pope became more important over time, there was a corresponding rise in the importance of Mary within Catholic devotion and doctrine. Maybe Mary fulfils a similar function to the angels: she is accessible and human where God, like the Pope, is other, distant, and cut off from ordinary people by layers of hierarchy and bureaucracy.

love your musings as ever. miss you x

Anonymous said...
This comment has been removed by a blog administrator.
6 February 2010 at 05:54