Meister Eckhart was born in Germany in about 1260, not long after Thomas Aquinas died. He was a Dominican monk, and an important theologian time, but unusually for such an prominent thinker, was accused of heresy under the Inquisition. 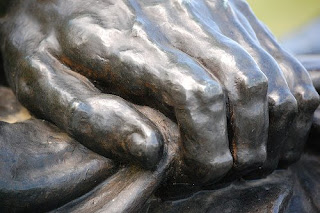 In his Talks of Instruction, Eckhart discusses obedience, which he sees as the most important virtue of all. Everything is made better when it’s done out of obedience, which is the decision to completely give over control to God, to say ‘not your will, but mine.’ He says that the best kind of prayer doesn’t ask for anything except for God’s will to be done, with no ‘I want’ or ‘I don’t want.’ The best sort of prayer is totally free, prayed by someone who hasn’t committed themselves to wanting a particular thing from God.

Eckhart says that some people make a big fuss about seeking God, saying ‘I wish I could be as close to God as person X is’ or ‘I can’t pray properly; I need to go off somewhere far away from everything; that’s why I’m struggling.’ ‘Just one more book about how to pray and I’ll crack it.’ ‘Maybe if I go on a pilgrimage to Lourdes, or to Toronto Vineyard Church, maybe then I'll be able to be close to God. Rubbish, says Eckhart: the problem isn’t your circumstances; it’s you. Particular places, forms of prayer, certain people, certain activities or ways of life, however good they are, can’t be the source of peace: peace comes from your own heart, your own willingness to renounce everything of this world and to be obedient to God’s will. Eckhart says that to the extent you give up yourself, your desires, and the things of the world, God will enter into you. Start with yourself, he says, however much it costs: it’s here and only here that you will find peace.

People should worry less about what they do and more about what they are. If you are holy, the things you do will be holy. It’s not our works which make us holy, but we who make our works holy. It’s more holy to stub your toe with a mind that’s holy than to take communion if your mind isn’t fully given over to God.

Eckhart says that someone once asked him whether people who withdraw to be alone with God are more holy. No, he says: if your mind and heart are right, it shouldn’t make any difference where you are or who you’re with. People who want nothing but God find him wherever they are. He says we should train ourselves to turn our minds to God in all situations: notice what it’s like when you’re in church meetings focusing on God, he says, and try to have that state of mind all the time, wherever you are. People who don’t have God within themselves are constantly trying to find him in external things: maybe if I go to this place, or pray like this, or spend time with this person. Eckhart says that practising the presence of God is like learning to write: at first you have to concentrate on every letter, but eventually it becomes second nature.

It's funny, actually: reading over this, it strikes me that what Eckhart says isn't a whole world away from some of the things that Luther says. Like Luther, there's definitely a bit of dualistic thinking going on, not to mention some Stoic-style thinking (have we done the Stoics yet? We should, they're mental). But I like Eckhart a lot more than I like Luther: the dualisms aren't so heinous, and he just seems kinder: the sort of person you'd enjoy hanging out with, even if it wouldn't bring you inner peace.

i like mr eckhart, and lots of things that he said. even if he was a stoic dualist.
didn't he write that bedtime story about small people that lucie occasionally reads? i don't think so, but for some reason the two always blur in my head.

Are you referring, perhaps, to Max Lucado, who wrote the classic 'You Are Special'? Because he's a whole 'nother century (in fact, several centuries later) than Eckhart. The funny things that go on in your head, nimoi...