The Gospel according to Steve Jobs

As the Western world has become less Christian, and involvement with organised religion has declined, sociologists have become interested in the question of what other forms spirituality is taking, and have started studying the ‘inarticulate’, ‘unconscious,’ ‘mystical’ and ‘symbolic’ aspects of religious experience. They’ve come up with the concept of ‘implicit religion’, which is basically the idea that the sorts of language, behaviour, and beliefs traditionally associated with religion can be found in non-religious contexts: among environmentalist groups, for example. There’s also been a lot of discussion of the religious aspects of the human relationship to technology, and it’s within this discussion that Pui Yan-Lam wrote his

2001 article ‘May the Force of the Operating System be with you: Macintosh devotion as Implicit Religion.’

Yan-Lam argues that ever since the birth of industrial capitalism, people have used religious language about technological innovations. Inventions like the steam engine and the telephone have been seen as offering the hope of salvation, and the possibility of ‘transcendence’, offering to set us free from the constraints of time, space and scarcity. Technology has been seen as a way of building heaven on earth, and the people who created these new technologies viewed as secular priests (a good contemporary example of this would be transhumanism, which basically argues that we can use technology to overcome human failure and even death). We tend to talk about new technology as though it contains some mystical power to transform or destroy the world.

Several sociologists have argued that our relationship with computers is different to our relationship with other forms of technology. We see computers as created in the image of our own minds, and as a result, think of computers as mirrors of our own humanity. People respond emotionally to computers, and use them to shape their identities and sense of self. We’ve all been there: your computer is slow, and you shout at it; you get an iphone because you think it will make you cooler as a person; you buy a Mac and you really love it, and look! It even does that thing where it looks like it’s breathing while it’s asleep.

Ah, Macs. Yan-Lam argues that Macintosh users are more prone than other users of technology to exhibit signs of implicit religion. Bear in mind that he is writing before the iPlayer, the iPhone and the Macbook, back in the days when Mac users were a beleagured minority, and Macintosh as a company looked like it was in danger of going under. He identifies four areas of implicit religion in users’ devotion to their Macintosh computers:

The Search for Meaning: Apple have always seen themselves as unique pioneers. Steve Jobs is often described as a prophetic figure, proclaiming a counter-cultural message in the face of Apple’s rivals: first IBM and then Microsoft. Apple have always painted themselves as the good guys, the ones who play fair, the good side of the force; Microsoft are the bad guys who break the rules and steal other people’s ideas; the Dark Side. 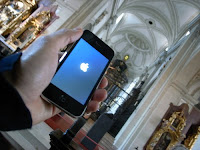 churches: building community, encouraging Mac ‘evangelism’ and testimonials about how Macs had changed their lives. Mac users see Mac evangelism as being about more than just persuading other people to buy computers: it’s about a philosophy, a way of life; and they tended to think that people’s lives would be transformed if they could be converted.

The Hidden Message: Sociologists have traced a change in our relationship to computers: where early on, computer culture was about mastering complicated programming, a ‘musical’ culture slowly emerged in which computers became seen as the tools of creativity, enabling human innovation. Much of this change was due to Apple. Mac users thought of themselves as different from other people. Just like in the PC/Mac adverts, they thought of themselves as nonconformists, slightly better than everybody else. They talked about the reality of this profane world in which Mac users are a persecuted minority and bad people like Bill Gates are rewarded, and their hopes for a future in which Mac users will be justified.

The Quest: Mac users tended to see themselves fighting a holy war against the Dark Side of the Microsoft world. They found a spirituality in this quest, which others might look for in religion.

Yan-Lam concludes by arguing that Mac addicts have adopted what can best be described as a ‘technotheology.’ He argues that our ideas about computers have, for some people, taken the role of creation myths, helping us understand what it means to be human and formulate our hopes for the future. He identifies three major themes in this new technotheology: the transformation of humanity into divinity, the quest for eternity, and the vision of the ‘blessed community.’ Makes you think twice about that iphone, huh?
Posted by Marika at 11:49

Three things:
1) You reminded me that in the early 90s, Umberto Eco wrote an essay about how DOS was Protestant and Windows, Catholic.

2) I certainly CURSE technology (when it goes wrong) in the way that you'd expect someone to curse their gods. Come to think of it, I also appeal to the computer, repent my previous lack of faith, think of worshipping a golden calf when it's back is turned and so on.

3) I'm glad this blog is getting more and more readers/followers. Means my praise can have company: otherwise like it looks like I'm an alias of yours just robotically writing things like: "genius!", "keep it up" et cetera...

I love my mac and always will... but i was slightly amazed that there's a macscripter club in Philadephia that meets weekly to talk about scripting developments and nothing else... I still get email updates from them, as they very kindly wrote me a script so that I could change the colour/style of text using keystrokes instead of my mouse. I suppose they're a bit like a prophetic persons' group or something in a church.

So many ideas, so little time to comment (going on holiday shortly and have much to do before then).

1. Yes, that's the Mac religion, despite the fact that they break so readily. I wonder as the religion becomes mainstream if its fervency will wane?

2. A similar study would be welcome into Web 2.0, otherwise known as 'the gospel according to Seth Godin'. It's going to have a bigger impact than the computers themselves, with new marketing models, social media, new values and principles coming into play. Godin's book 'tribes' uses the heretic/orthodox dualism copiously (very GKC), and he openly advocates generosity, honesty, and making a difference as the ways to operate today. These are becoming the mantras of Gen Y. It's more faith-filled and loving than many churches, put it that way.

3. I suspect myself of believing that technological progress is part of God's redemption of all things. What does that make me again?

Technotheology: A couple of years ago a friend and I were trying to get a DVD to play on her (windows-running) computer. After a frustrating half hour, she whipped a rosary out of a desk drawer (where apparently it lurked ready for all such emergencies) and said some quick prayers over it.

Perhaps as Mac becomes more mainstream, linux/opensource will take its place as the cement of a new 'blessed community'?

A blog for Steve Jobs for being the best of the best god given gift.


My Blog: Remembering Steve Jobs – The Man, The Entrepreneur, The Maverick