In her essay 'The soul's successors: philosophy and the “body”', Mary Midgley argues that there’s a funny paradox in the way that the secular world thinks about human identity: on the one hand, it’s sniffy about the idea of a soul, or of the idea that there’s anything in human nature that can’t be explained by the science of physical processes. But at the same time, contemporary culture is very individualistic, and this individualism depends on the idea that we all have independent, rational minds, and tends to see the mind’s independence from the body as what makes it special. We see ourselves essentially as intellect and will, our bodies mere tools for doing what we want to do. We do like a good dualism, we human beans: ask any theorist what it means to be human, and they’ll pick two opposing elements. The mind and the body have for years been portrayed as opponents in the drama of human nature: we think that asserting our own will rather than doing what comes naturally is at the heart of being human. 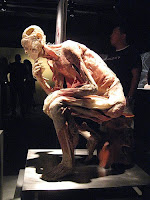 All of this discussion is essentially about it means to be an ‘I’, a self, and individual. Enlightenment rationalism thought that the ‘I’ was an isolated will, directed by intellect, and randomly and arbitrarily tangled up with unhelpful feelings and physicality. Seeing the individual like this made it possible to argue that we should disentangle ourselves from the constraints which come with embodiment, including social constraints like our allegiance to kings, churches, and custom. The Enlightenment model of the ‘man of reason,’ the ideal human being, was precisely that: a model of a man. Men were seen as rational, intellectual, willing people, and women were identified with emotions and the body. But the problem with this model was that even the men who most embodied this ideal, who were most able to spend their time thinking clever thoughts instead of worrying about what to eat for dinner, were utterly reliant on other people, who would cook for them, clean for them, and get them out of bed on time. The Enlightenment ideal doesn’t work, because ultimately we need each other to live.

Midgley blames Nietzsche, in part: he was skeptical about the possibility that groups of people might arrive at the same rational and moral conclusions, and was pretty grossed out by the idea of community. Nietzsche was neither a socialite nor an extrovert: his philosophical ideal was all about solitary strength, seasoned with a good pinch of misogyny. He couldn’t see that solitude might be just as much a hiding place for weakness as an expression of strength.

The Enlightenment ideal was fine, just as long as women weren’t considered fully human, and were left to all the hierarchical, emotional and biological bits of being human while the men ate their tasty suppers, slept on their clean sheets, and swanned around being free, autonomous, intellectual and creative. The problem now is that some women have noticed that this arrangement isn’t entirely fair on them, and have started pointing it out (cheeky bints). As a result, there are now two political choices: either we start seeing everyone equally as a solitary individual, or we radically rethink the notion of individuality. Midgley thinks that the latter options is better, and that feminism is starting to move in that diraction, but she says that it’s not always clear where it will take us.

In the Enlightenment model, the will was very important: 'reason' consisted of both intellect and will. Today, there’s less emphasis on the will, and more on the scientific intellect: transhumanism, for example, imagines that humanity will continue to exist as disembodied computer-minds.
The problem isn’t just that rational choice is seen as better and more important than the emotions: it’s also that it’s been seen as completely separate from them. This is a pretty crappy account of what it means to be human. Contemporary philosophy is moving towards rejecting this dualism, but it still tends to prefer some sort of ‘materialist’ account which explains human nature as a bunch of physical processes, and usually ignores the body below the neck (where all the fun bits are). Contemporary discussions are all about the relationship between the mind and the brain, or the mind and the physical world as a whole. Human flesh and bones and squidgy bits, not to mention those crucial naughty bits which distinguish men from women and suggest that 'Man' is a poor homonym for 'humankind', are still largely ignored.

enlightening and entertaining as ever
keep up the good work, glad to see your getting more reads and stuff

Good as always, even 'though I was a little worried at first, given that I have looked on in horror at oceans of drivel written in the name of "bringing the body back" against the evil Cartesian orthodoxy et cetera.

Don't get me wrong: I agree with everything you've said above.

Also, I like Merleau Ponty, Martha Nussbaum's famous book on considering the emotions et cetera. It's just that I have been burnt by loads of terrible stuff I've seen that seems to suggest that everyone in the West was basically unaware that we had a body prior to a particular academic conference at Buffalo in 1995 where we also (apparently) learned to not feel hung up about sex, to respect other people and so on.

I mean, I know you're not doing this, but I do think, that there is a lot of stuff out there, basically dedicated to simultaneously setting fire to a straw man and flogging a dead horse: "Purely mental ethereal beings: no thanks!"; "Philosophers: give us back our elbows!" I mean, Plato, anyone? Aristophanes?

Should be more specific: I'm only objecting to the thing of accusing millenia upon millenia of an error, so that we can preen ourselves on not having made the same error. But the trick is, actually doing the work, making a new kind of psychology (or whatever) not the terrible, meaningless cheerleading I've seen sometimes: Bodies, yay!, saying no to bodies: boo!

Richard Schmitt (a philosophy prof at Brown University in the States) in his book 'Beyond Seprateness' offers an interesting exposition of Virginia Woolf's 'To the Lighthouse':

"Men pretend to be autonomous but are actually intensely dependent on women not only for the care of their physical well-being but to replenish their spiritual resources. They live off women; their pretended autonomy is a form of parasitism. They are incapable of genuine intimacy with either women or men. Men mistake their distance form other humans for autonomy and their addiction to abstract thought for rationality. Their constant preoccupation with abstract issues and competition unfits them for maintaining any sort of human environment for themselves, let alone for children and women. Women, by contrast are forced into the role of caretakers, of providing what men need but are unwilling to provide for each other or children. As thanks, they receive sneers for being different from men, for not sharing in the abstractions of men. Deprived, by men, of the chance for autonomy, women are then devalued for lacking autonomy. The autonomy of men is oppressive to women.' (p. 35)

I like the post, I always find they make me think. I just found the throwaway comment at the end "those crucial naughty bits which distinguish men from women" uncomfortable. Genitalia doesn't distinguish men from women, as much research into gender roles, reproductive capabilities, and non-normative genitalia ('intersex people') tells us. I personally would feel more comfortable if you didn't include such comments in future.