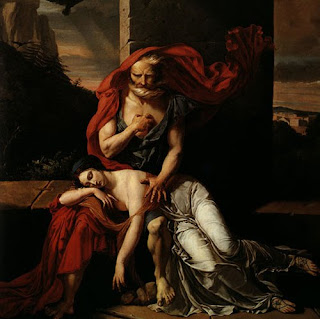 We've established, then, that Freud thinks that 'primitive' societies can tell us something about the evolution of all human societies, and found out about the totem system which regulates who you are and aren't allowed to sleep with, and has a whole complicated set of rules for how to relate to your totem animal: when you can and can't kill it, how to appease it if you make it angry, all that stuff.

This is where the psychoanalysis kicks in. Freud thinks that children and 'savages' relate to the world and particularly to animals in very similar ways: both see animals as equals, rather than as lower beings. The things we learn from the psychoanalysis of children can be read back into the psychology of 'primitive' societies. Freud has found that children sometimes develop phobias of animals, which have some similarities to the ways that totem societies relate to animals, trying to avoid seeing or touching the animals. Because kids are kids, it's not always possible to work out where the phobia came from, but that doesn't stop Freud deducing this: childrens' fear of animals is always a displacement of an underlying fear of the child's father. It's the Oedipus complex, stupid: Freud thinks that all small boys fancy their mums, and as a result want to kill their fathers. But because daddy is big and strong, the boys are afraid that they will lose out in the battle for their mothers' love, and that their father will castrate them. Eventually, they resolve this fear by identifying with their father and giving up their desire for their mother which eventually resurfaces as the desire for other women: that's why men marry women like their mothers.
Still with me? This is Freud's argument: that the totem animal on which tribal systems are based is a substitute for the figure of the father. His theory about the origins of human society goes a little something like this:
Once upon a time, most humans lived in small hordes, each dominated by a powerful man, who was the absolute ruler of the horde, with unrestricted power and exclusive access to the women. Any sons who were born into the horde had a rough time: if they did anything to make their father jealous, they were killed, castrated, or driven out, in which case they had to make their own way, robbing wives for themselves from other hordes until they could be the ruler of their own horde. Eventually, the expelled brothers banded together to kill their father and, as was the done thing at the time, ate him, raw (nom nom). Primitive men's attitude to their father was the same as the attitude of children in our society: on the one hand they hated and feared him, but on the other, they honoured him as a model and wanted to take his place, and cannibalism was a way of identifying with him.
Once they'd killed the father, the brothers realised that they needed to cooperate or have to keep killing each other until there was only one of them left, so they agreed to form the first societies, creating laws which forbade them from sleeping with each others' wives and forced them to share. This is the origin of all morality, justice and society, all of which arise from the primal guilt resulting from the murder of the father, and the desire to atone for this original sin. The brothers chose an animal to represent their father, and displaced their ambivalent attitude to the father onto the totem animal, which on the one hand was seen as the clan's blood ancestor and protective spirit, and on the other was regularly and ritually killed in the clan's festivals, and, like the father, eaten.
As religion evolved, the totem gradually evolved into a god with a human form, and this allowed the animal sacrifice to return, eventually, to human sacrifice, which we see in Christianity, the most highly evolved of all the religions. Christ sacrificed his life to atone for the guilt arising from the murder of the Father, but even here we see some of the ambivalence to the father: in the same act which pays for the murder of the father, Christ achieves what primal man wanted to achieve, and replaces the father, becoming a god himself: the religion of the son replaces the religion of the father, and instead of eating the body of the father, it is Christ's body and blood which are consumed in religious ritual.
Communion, anyone?
Photo credit: Oedipus and Antigone, litmuse on Flickr
Posted by Marika at 10:07

Isn't your suggestion that Christ only became God (or a god) on crucifixion some sort of massive heresy? I'm fairly sure it's just illustrative of themes here (indeed, following a description of all gods being man-made), but I thought I'd get it clear, that I might better comprehend your point.

Oh, absolutely. Freud isn't trying to articulate a Christian theology, but to expose what he sees as the psychological underpinnings of Christian theology. Although I do think that some biblical scholars have argued that, in the very early church, Christ was seen as becoming God only at the crucifixion, and that this divinity was gradually read further and further back in history until they decided that he'd been God all along: it might be this that Freud's referring to, but I couldn't vouch for it.

Ah yes, Totem and Taboo -- Sigmund "if I come up with a theory then it must be true" Freud at his best.