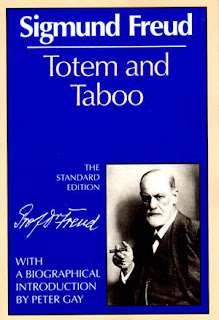 We've established, then, that Freud thinks that by looking at 'primitive' tribes we can gain important insights about the origins of human culture. In particular, he's interested in societies which are structured by systems of totem because he thinks that these societies are the most primitive and exemplify a stage of culture which all other societies have gone through at some point. Within totemic societies, the rule tends to be that you can't marry anyone within your own tribe. This is particularly interesting to Freud, because the 'prohibition on incest' (The rule that says you can't sleep with your mum/sister/brother/dad/cousin' etc.) is one of the most universal human laws: different societies have different ideas about who you can and can't sleep with, but they all have some sort of prohibition on incest.

It's easy to assume that societies ban incest because it's fundamentally wrong and icky, but Freud points out the problem with this line of reasoning: if it's so essentially repugnant to people, why have laws against it, and punishments for it? Societies make laws against the things that people want to do: killing people, taking their stuff; not so much about doing things that no one would want to do in the first place: find me the society that severely sanctions those people who eat their own poo or refuse to go to sleep, and I shall be surprised, to say the least.


Anyway, totems. In totemic societies, people belong to tribes which each have a 'totem', their tribal symbol. It's usually an animal, but sometimes a plant or a force of nature, like the wind. Here are twelve characteristics of totemic societies:


Coming soon: what this all means for the origin of human society, religion, and the concept of God.
Posted by Marika at 13:39