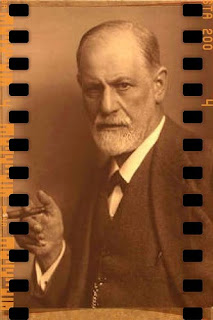 Sigmund Freud isn’t a theologian, but he profoundly shaped the way that twentieth-and-twenty-first-century Westerners think about the world, and although scientists tend not to take him very seriously (how would you set up an experiment to test whether all men fancy their mothers?), he’s been incredibly influential on continental philosophy, which in turn is incredibly influential on a lot of modern theology.
Totem and Taboo isn't, as you might expect, just about psychoanalysis. Instead, it's an attempt to use the findings of psychoanalysis to gain insight into the origins of human society as it is about psychoanalysis. Freud is writing at a time when there was an explosion of interest in the tribal societies which European colonialists were encountering and trying to civilise all over the world. J G Frazer had written his book The Golden Bough, intended to be a universal theory of human mythology, which described the myths, magic, religion and social practices of some of these newly discovered cultures. The disciplines of anthropology and sociology were just beginning, and anthropologists in particular were studying tribes in the Australias, the Americas, and all sorts of other places which looked, to them, to be pretty primitive. They thought that by studying these tribes they could find out things about the origins of human society. These are the sorts of discussions that Totem and Taboo engages with. It’s pretty racist, with lots of comments about 'backward and wretched' savage and primitive races, and has plenty of questionable assumptions, but I think that's basically what you get when you read Freud, or indeed almost anyone else from that era.

These are his basic ideas:
Coming soon: Freud’s theory of the origin of human culture. And yes, it does involve sex.
Photo credit: Carla216 on Flickr
Posted by Marika at 12:38