Karl Barth on the Trinity: Part One 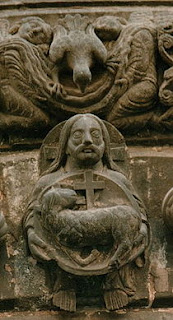 Don't worry, we'll be back to Paul - I just got bored of him for now. I also won't be posting multiple part things forever. It's just a phase I'm going through and I'm sure I'll get bored of that too sooner or later.

One of the things Barth is reacting against is a tendency in theology at the time to suggest that basically we create God rather than vice versa, that God is in the image of man rather than man being in the image of God (variants of this idea were put forward by people trying to defend Christianity as well as people trying to attack it). Someone once described theology as being a bit like riding a donkey: you lean too far one way and you fall off, but then if get back on and lean too far the other way, you also fall off. This is a bit what Barth does: think of him as the guy in the ditch, wondering what the hell happened when all he did was try not to fall off like Schleiermacher did. He doesn't want God to be something we make, and so he reacts by making God so completely different to us that there's no way we can even imagine him unless he reveals himself first.

For similar reasons, he's also bothered by the traditional use of language for talking about the Trinity. The classic formulation is that God is three persons in one nature, but Barth worries that this makes him sound too much like three guys who are all God. This is fair: one of the classic Christian heresies is tritheism, where you overvalue God's threeness and underplay the oneness. Barth doesn't want to do the other heresy which is saying that God's one and then losing all sense of threeness, but it's arguable that that's what he does, and finds himself back in the ditch. So, what does he actually say?

The Place of the Doctrine of the Trinity in Dogmatics
Barth says that God, the Trinity, is 'Revealer, Revelation and Revealedness.' God is the one who reveals Godself, the actual revelation, and the effect of this self-revelation on the people to whom God reveals Godself. Barth says that for this reason, the doctrine of the Trinity is the starting point of all Christian theology because it answers the question, 'Who is God?' 'Who is God?' comes before questions about how we know God, whether God exists and what God is, because the question of who God is gives us the content to the word 'God' without which the other questions don't make sense.

Hi,
I started a series in January titled, "One Year With Karl Barth"

I am reading through the CD and posting my thoughts and conclusions. I am new to Barth, but would love to have some interaction from those who are more experienced readers.

Ha ha.. I see I have read here before Marika. Thanks for the link back though. ;-)

You provide some good background for me so when I get to the CD section on Trinity, it will be helpful.

I have tried hard for years to ensure that my theology is not a "reaction against" but a "response to" the Holy Spirit. I may not always succeed, but it remains my goal.

what's wrong with theology being a reaction against something else? Unless you're aiming for a totally non-partisan standpoint you can't escape it. Aren't many responses to the Holy Spirit also reactions against unholy spirits?
Isn't the history of the church a question of discovering a donkey, conceived at pentecost and gestated through 60-odd years of apostolic teaching, and spending thousands of years leaning leaning all over the place but also developing a sense of balance? (I don't mean to imply that 'balance' is at the heart of good theology - just at the heart of good donkey-riding).