That’s Latin, folks. It means ‘the works of the Trinity on the outside are indivisible’, and is one of the theological rules for talking about the Trinity. Cool, huh? 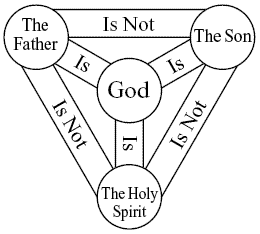 Let’s elaborate a bit more. We know that God is one and three, that he is God, and that he is Father, Son and Holy Spirit. But what’s the difference between the three persons (or ‘modes of being’ for the Barthians down in the ditch there – watch out or the donkey of theology will spit on you)? Contrary to popular belief, traditional Christian theology would argue that you cannot distinguish the persons of the Trinity by the way that they act in the world – it is not true to say that the Father creates, the Son redeems and the Holy Spirit sanctifies. The only way you can distinguish between the three persons is by their relationship to each other. So, what does it mean for the Father to be the Father, the Son to be the Son, the Spirit to be the Spirit? Basically, this: that the Father is the source of the Son and the Spirit. The Son is begotten of the Father. The Spirit proceeds from the Father (and the Son, if you’re a Western rather than an Eastern Christian, but that’s a whole ’nother source of theology wars so we’ll leave it for today). They’re distinguished by their different origins, and by those alone.

That means that anything God does in the world, all three persons do. In the Orthodox church, this tends to be formulated so that the Father acts through the Son in the Holy Spirit. They say this a lot, so tend to be better than Western Protestants at remembering that Christianity is Trinitarian. You can also use a sneaky trick called attribution, where you attribute certain characteristics to one person of the Trinity more than the others, which isn’t true as such, but can be helpful – so we talk about the incarnation of Jesus, the gifts of the Holy Spirit and the Father’s love. It’s not that the gifts are actually any more to do with with Holy Spirit, but it can be a helpful way of getting some sort of slippery grip on the whole complicated trinitarian puzzle. Maybe.

You with me? Don’t worry if your head’s spinning – you wouldn’t be the first to be befuddled by it all. But take heart! Next time someone talks about the gifts of the Spirit or whatever, you can look wise and say (as I did today – sorry Lucie!), “Ah, but opera trinitatis ad extra indivisa sunt”, and feel clever, which is really what theology’s all about.
Posted by Marika at 11:11

And they would reply -'ah yes, speaking in tongues - another gift of the spirit.'

-They’re distinguished by their different origins, and by those alone.-

I would add they seem to differ in how they interact. The Son does the father's will and not vice versa (more latin)
(The Holy Spirit) will glorify Me, for He will take of Mine and will disclose it to you.

Interesting, I've not come across that idea before. Do you know where it comes from/what the Latin phrase is? In what sense does the Son do the Father's will if not 'on the outside'?

I believe the Latin phrase was made popular by Augustine in his later writings on the Doctrine of the Trinity.