Nemesius of Emesa on human nature 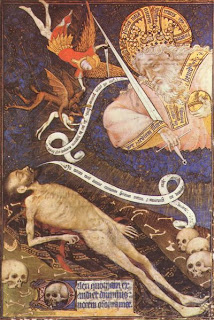 Nemesius of Emesa is a bit of a mysterious figure, so obscure in fact that the latest translation of the only book of his we have ('On Human Nature') has been translated recently by a medical historian rather than a theologian. He was writing in the late 4th century, around the same time as the more famous Gregory of Nyssa (honestly, he really is quite well known in the world of patristics). He's interesting because, unlike a lot of his contemporaries, he seems to have been pretty hot on the classical philosophers and thinkers from Plato and Aristotle to Galen (a big medical man) rather than just having read about them second hand.

Nemesius claims to be the Bishop of Emesa, which we have no reason to disbelieve. Emesa was one of the more hellenised (that is, Greek culture-ified) parts of Syria, so he may well have had a proper classical education. Although he wrote in the fourth century, no one seems to have heard of him until the 7th century, when first Maximus the Confessor wholesale lifted bits of his writing and incorporated them into his work (he wasn't a big one for quoting his sources, which was more ok then than it is now), and then John of Damascus both quoted and acknowledged him. He later became popular in 'floria legia', which are big books of quotations from the Fathers which were used in Byzantine monasteries to educate monks, functioning a bit like the wikipedia of their day: want to know about the incarnation? Read this bit from Father X, he's good.

The reason that Nemesius got popular in these compilations is that he had a very neat solution to a very vexing problem. Given that humans are able to choose to repent, or to sin once they've been righteous for a bit, what's to say that the angels and demons can't similarly recant and swap places? No one really wanted to allow for this possibility, because it causes all sorts of celestial chaos: bad enough keeping tabs on flighty humans, let alone a whole cosmos of beings switching allegiances and changing their mind, and heaven forbid we have to start seeing even Satan as capable of repentance.

But how do you explain the difference between humans and the spiritual beings? The problem was made worse by Origen, who occupies an interesting place between respected Father of the Church and heretic. On the one hand, he came up with some important and influential theological ideas; on the other, he thought that the cosmos had started out with loads of beings, all of whom had fallen. The ones who fell a lot and were really naughty were made into demons; the ones who hardly screwed up at all became angels, and the middling sinners became human beings. Odd, no?

How to get away from Origen, then? Nemesius did it by arguing that the thing that's distinctive about human beings is that they have both souls and bodies. Animals and plants have bodies but no souls; angels and demons have souls but no bodies. This uniquely human combination gives humans two special privileges. On the one hand, only humans are pardoned when they repent; on the other, they're the only bodies to be granted eternal life. The pardoning privilege comes from the body, because unlike the angels and demons, human beings have animal needs and affections which can lead them astray. The bodily immortality privilege comes from the soul, which is immortal and thus grants immortality to the body.

This is a very satisfying theological solution, because it's often difficult for the Fathers to give the body much significance - they tend to see the soul as more important and generally better, and so often drift away from orthodox Christianity which demands the redemption and resurrection of the body. It also, I think, plays nicely into a lot of contemporary discussions about the future destiny of the physical creation, which has implications both for Christian environmental ethics, and also for our attitude to work. Whether it solves the problematic questions about the potential salvation of the devils which arise from the discussion of evil as deprivation, though, I'm less sure...
Posted by Marika at 12:26

Of course, this suggests that there is a distinction to be drawn between the body and the soul: isn't that rather a gnostic point of view? Or, worse, Cartesian? As I understand it, the 1st century Jewish way of understanding resurrection revolved around the body.

Don't forget that bioenergetics doesn't like the mind-body split all that much...

So where does that leave Origen et al?

Well, pretty much everyone I've come across has some sort of body/soul dualism, most, I think because the body continues to exist even after death, attesting to its relative independence from the soul, and because angels (and God) don't have bodies, attesting to the possibility of the existence of bodiless souls. The dualism only really gets Cartesian though when you start to see them as basically independent of one another - Aquinas criticises Plato for thinking that the soul simply wore the body like a coat.

There are lots of different ways of articulating the relationship between body and soul within Christian theology, and I think they're variously successful in avoiding Cartesian-style dualisms. I'm not quite sure how persuaded I am by Nemesius, but I'm planning on writing an essay about something very close to this issue, so maybe in a few months I'll have more to say about it...

PS Obviously Origen is wrong on his theory about the angels etc. That's partly why he's generally a bit dodgy. I do think it's quite sweet, though, somehow.

Do you happen to have the electronic form of the text of Nemesius of Edessa?

If you really mean Nemesius of Edessa, I'm afraid I can't help you; but if you're interested in Nemesius of Emesa, there's an excellent new full translation available by Philip Van Der Eijk and R W Sharples, though I don't know where you'd get hold of the untranslated version. Sorry!

Thank you for your answer. At the time of writting I had the mind occupied by the Syriac school of Edessa. (And I'm not a specialist in patristic!). I know the translation that you recommend to me, I think the only solution is to buy it.

Because you are also interested in apophatism, I allow me to ask you if "being intelligent" or even "brilliant" and, on the other hand, "being beautiful" could be defined cataphatical?