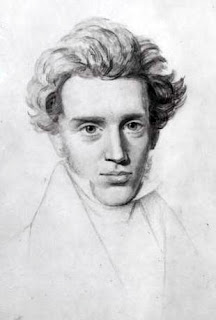 First off, it's not 'Keer-ke-gahrd', it's 'Keer-ke-gore', though you might want to stick with the former pronunciation outside of academic circles in order to avoid sounding like a nob. Unlike many other philosophers, his biography is incredibly important for understanding his philosophy, as will become clear as we go on.

Søren Aabye Kierkegaard (I'd be lying if I said I knew how to pronounce either of his first two names) was born on the 5th May 1813 in Copehagen (Denmark, in case you weren't sure). His mother was his father's second wife - she'd been his maid until after his first wife died, though he did have an affair with her before they tied the knot. His dad was exactly the sort of father you'd expect to produce a tortured, socially inept child: disciplinarian, overbearing, deeply pious and a devout member of the Lutheran church. He had a close but difficult relationship with Søren, and believed that he was under a divine curse, partly because of his extramarital rumpy pumpy with Søren's mum, partly because as a younger man he had, apparently, stood on a hill and cursed God, so it was only reasonable to expect to be cursed back. Cursed or not, five of his seven children died before he did, leaving only Søren and his older brother.

Søren didn't have many friends as a boy, and was lonely and introverted at school, though he did develop a good line in snarky witticisms. I think it's fair to say that all of these characteristics could equally be identified in his adult self.

After school, Kierkegaard began a degree in theology but got sidetracked by a life of dissipation and also put off by his sense that the ideas being bandied around within the university had very little relevance to life as a whole. He wanted something he could throw his whole self into. In 1843, eight years after he started his degree, his father died. Søren seems to have seen his father's death as some sort of sacrifice on his behalf, and, in an attempt to honour his deceased dad threw himself into work, finally finished his degree, began training to be a Lutheran pastor, started an MA and got engaged to Regine Olsen, the respectable daughter of civil servant. Not one to be half-hearted, even in an attempt to become an upstanding citizen, our Søren. But then it all went a bit pear shaped. Apparently he'd had misgivings about his engagement from the start, though it's not quite clear why: perhaps something to do with thinking that his melancholy disposition or his calling as an exceptional individual (modest too - I fancy him already) made him unsuitable for marriage. He wrestled with his doubts for a year, until finally breaking off the engagement.

This represented a crucial turning point in his life: he gave up on a career in the Church and began a very solitary existence living on money he'd inherited from his father. He starte

d writing and was incredibly prolific, writing one or two books a year for about seven years. In 1845, a collection of essays was published, one of which criticised Søren not only for his writing but also for his treatment of Regine Olsen. He was furious. The author who'd been critical of Søren was an aspiring civil servant, and also worker for The Corsair, the Private Eye of its day, which had so far left Kierkegaard alone. Kierkegaard wrote a savage attack on the poor guy, seriously damaging his career prospects, and challenging The Corsair to 'Come and have a go if you think you're hard enough', which they did, mocking Søren verbally and pictorially for weeks on end. Kierkegaard took this pretty hard, though he literally had asked for it.

He was never particularly widely read, though believed that he would be read hundreds of years into the future and that his thought would become profoundly influential. He was, of course, right, or we wouldn't be here now talking about him.

Towards the end of his life, he became increasingly hostile towards the Church, arguing that it had become basically secular and was really only interested in forwarding the interests of the bourgeoisie. He increasingly called on his readers to disengage from any form of official worship.

In 1855, at the age of 42, Kierkegaard collapsed suddenly in the street and died a few weeks later in hospital
Posted by Marika at 11:35

Great entry on Kierkegaard. Just wanted to let you know Soren is pronounced something resembling Zurn - I once asked a real life Dane on holidays at a caravan park. He made me practice until I nearly choked trying to get the Danish pronounciation of Kierkegaard right. He had a good laught. Most academians do not do it justice, so I stick with the English version.