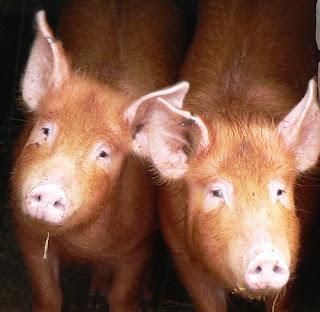 One day, Brother Juniper was visiting a sick monk. He asked the ill brother if there was anything he could do for him, to which the ailing monk replied that there was nothing he'd like more than a pig's foot to eat (these were the days before McDonald's). So Brother Juniper borrowed a knife from the monastery kitchen and set out to see what he could do. In the forest he found a herd of pigs. He caught one, cut off one of its feet, left the rest of the pig to hop around the forest, and ran back to the monastery where he cleaned, cooked, and served up the tasty pig foot. The sick monk was happy, and Brother Juniper was overjoyed at the success of his kind gesture. The swineherd who saw Brother Juniper sawing off the pig's foot: not so happy. He went to his lord, who stormed round to the monastery, pretty angry, shouting that the monks were robbers and thieves. 'Why', said he, 'have you cut off the foot of my swine?'

St. Francis and the monks had no idea what the lord was talking about, but apologised profusely, and offered to repay the lord. He refused, however, and stomped off home, still fuming. It occurred to St. Francis, a wise man, that perhaps Brother Juniper had something to do with the situation, so he called him in for a chat. Brother Juniper confessed quite happily to stealing the pig's foot, clearly unable to see that he'd done anything wrong, relating the story of how he'd gone out of his way to make the sick monk happy, entirely oblivious to the idea that not everybody would be quite happy about what he'd done.

St. Francis sighed. 'Oh, Brother Juniper. I'm afraid you're going to have to go and apologise to the pig's owner, or he'll go round slandering us to everyone.' Brother Juniper was amazed that there should be such a fuss over his act of kindness. He ran off after the lord, and when he caught up with him, related the whole story of how and why he had cut off the pig's foot, fully expecting the lord to share his joy over the happiness of the sick monk. The lord was still struggling to see things from Brother Juniper's perspective, and shouted and cursed him even more. Brother Juniper could not understand the man's lack of joy, so assumed he simply hadn't understood, and proceeded to explain to him again the love and charity which had motivated him, encouraging him to donate not just the remaining feet but in fact the whole pig. He made his case with such humility that the lord fell to the ground in repentance and weeping, and made haste to take the three-footed pig round to the monastery to donate it to the friars to make up for his bad temper and all the shouting.

Considering the simplicity and patience of Brother Juniper, St Francis turned to the monks and said, 'Would to God, my brothers, that I had a whole forest of such junipers!'

Photo credit: johnmuk on Flickr
Posted by Marika at 23:05

These tales of Brother Juniper are fantastic. I can't think how they don't gather more comments here. The man's a hero, and I wish I were more like him (though not too much more like him).

Are those the Tamworth Two in your pigture?

Did Brother Juniper have Asperger's by any chance?

Plenty of people have suggested so.

Liked the story. Used it in my sermon today, in fact. IMHO, a great example of the power of God's love when it infuses an individual and then oozes through that person to those around them, both in their own faith community (i.e. St. Francis' faith community) as well as in the wider world (i.e., with the lord).

Thank you for sharing it!

Easily I assent to but I dream the post should acquire more info then it has.

Brother Juniper's humble explanation to Francis was made in all earnestness, I don't doubt. Yet he seems to epitomize a certain "holy rascality" that we Christians could sometimes do well to emulate. God didn't intend us to be dour. Juniper, in some ways, reminds me of a Franciscan version of a First Peoples' "contrary" ;-)