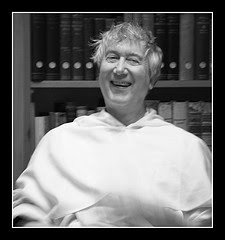 It was lunchtime in the monkery, and Brother Juniper was meditating by the altar. It was a beautiful altar - draped in fine cloths and hung with all sorts of beautiful ornaments. The sacristan was there, guarding the lovely altar from thieves, but as time passed he got hungry, and so he asked Brother Juniper to keep an eye on the altar while he nipped into the kitchen for a sandwich. While he was gone, a little old lady came up to Brother Juniper and begged him for alms. 'I'm sure we can find you something', Brother Juniper replied. He went over to the altar, and saw that it was hung with pretty little silver bells. 'Pff' he said, 'we don't need these.' So he snipped them off and gave them to the beggar woman; and off she went.

Meanwhile, in the kitchen, the sacristan suddenly remembered that Brother Juniper tended to give away things that weren't really his to give. What had he done? He jumped up and rushed back into the chapel, but it was too late to save the bells. He rushed off into the town looking for the beggar woman, but she was nowhere to be seen. He went back to the Convent and found the General, and said crossly 'Please sir, punish Brother Juniper. Look, he's cut off the silver bells to give to a beggar woman and ruined the lovely altar!' The General replied, 'It wasn't Brother Juniper who did that, but your foolishness. What did you think would happen when you left him alone in there? Idiot. Still, I suppose I ought to tell him off.' So he called all the friars together, and gave Brother Juniper such a telling off that his throat was sore by the end of it. Brother Juniper didn't much mind the scolding (he was used to it), but felt bad about the General's sore throat, so he went into the city and ordered some good buttery gruel. Late that night he went back to pick it up, and made his way through the dark convent to the General's door, where he started knocking.

The General came to the door, sleepy and a bit dazed, to find Brother Juniper standing there with a candle in one hand and a bowl of gruel in the other. He sighed. 'What is it now, Brother Juniper?' Brother Juniper beamed. 'I noticed that when you shouted at me earlier, you made your voice hoarse with all the yelling, and so I got you this gruel. Drink it: you'll feel much better.' The General was cross. 'What time do you call this?' he said. 'What on earth makes you think I want to be eating and drinking at this hour?' He threw in some more words too, only they were a bit rude. Seeing that the General would not be persuaded to eat the gruel, Brother Juniper said to him, 'Well, if you really won't eat it, would you hold my candle for me while I eat it myself?' Looking at the simple, pious monk, the General relented. 'I'll tell you what Brother Juniper. Sit down and we'll eat it together.' And so they did.

Photo credit: Lawrence OP on Flickr
Posted by Marika at 19:33

These Brother Juniper stories are so offbeat that they bring enlightenment in through the servants' entrance, so to speak. I feel quite a kinship with him.

And it just so happens I was reading this one in the "Fiorella" not five minutes ago, then came here and lo! here it is again -- this time recounted in more of a vernacular style, which was a good contrast.

Thanks for this unexpected and joyful bit of synchronicity, for sharing this story with all your readers, and for finding such an appropriate photo to illustrate it!

I love the Brother Juniper stories, though I suspect that I'd be as cross as the General if I actually had to deal with him in real life. I love that he's in there with all the miracles and the wise words of St Francis, and I wonder what we lose by losing the idea of the 'holy fool' in contemporary Christianity.

I googled Brother Juniper and it turns out some people think he had autism. Waddya reckon?

In the version I'm reading, I was highly amused to note the translator's comment that "If anyone ever needed a spiritual director, it was Brother Juniper"! The sentiment is understandable, but I'm not sure Juniper could have been repressed, any more than staking down Joseph of Cupertino could've stopped him from flying over the altar and catching his robe on fire.

As to the retrospective question of whether Juniper might have been some form of autistic, it seems to me that the current broad definition of the spectrum of autism lends itself readily to this type of Procrustean cottage industry. I mean no disrespect to researchers, clinicians or sufferers, of course.

In my opinion Brother Juniper is the most interesting friar described in the Little Flowers of St. Francis. He was not afraid to defy authority.