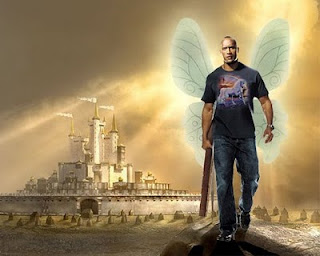 Roland Boer is an Australian theologian who writes what I guess is a mixture of biblical criticism and critical theory (surprisingly hard to summarise what that is: suffice it to say that it's not a way of thinking usually applied to biblical studies. If you really want to know, Google it. We are in the 21st century, after all, and I won't do all your work for you). He is fun. He also has a new article in the Journal of Men and Masculinities, called 'Of Fine Wine, Incense and Spices: The Unstable Masculine Hegemony of the Books of Chronicles.' Don't freak out too much about the long words. We'll go slow.

Basically, Boer's idea is this: our ideas of what it means to be male and female aren't eternally fixed. They're constantly changing, and so if you want (as he thinks the writers of Chronicles did) to maintain a particular idea of masculinity which makes men more important than women, you have to keep propping that idea up. There's no single definition of what it means to be 'masculine' or 'feminine', so in every society we have a whole set of tools for defining those terms: actions we do, the words we use, particular ways of talking about the world and about people. But because you have to keep doing or saying all of the things that establish our idea of masculinity, there's always the risk that you might start to subvert it: you might start acting so hyper-masculine that you end up actually being camp. Boer's basic argument is that the books of Chronicles are all about propping up a particular idea of masculinity, and a particular vision of a society where men rule, ok; and his argument is that the whole thing goes so over the top that it starts to fall apart. It's less Chuck Norris or Bruce Willis and more Conan the Barbarian or Flash Gordon.

One of the key elements to Boer's argument is the centrality of the description of the Temple to the books of Chronicles. According to the dimensions given in Chronicles, the temple vestibule would have been twice as high as the whole temple was long. This seems a bit silly, and various commentators have suggested that maybe something's wrong with the text, but Boer thinks that the ridiculous dimensions are exactly the point: they make the temple a big ol' phallus, ‘like some angular cock raised to the heavens with its balls on the ground.’

He also talks about the begats (you see! you shouldn't have skipped them: there's important stuff in there). The Hebrew idiom goes 'Abraham begat Isaac etc.', but the way the verb's used means that it could actually be translated 'Abraham caused to bear Isaac', and because there's no mention of the women it sounds like the men give birth to other men. By excluding the women, the text inadvertently ends up in the same dubiously masculine territory as Arnold Schwarzenegger in Junior (That one where Arnie gets pregnant).

Boer also points out that there's an awful lot of information in Chronicles about the duties of the priests, which seem to involve a lot of cooking, cleaning and singing; and an incredible amount of detailed concern with interior design. Just as for us, Lawrence Llewellyn-Bowen has somehow failed to achieve the status of 'heterosexual icon', Boer suggests that there's something a bit girly about all of this.

Overall, Boer argues that the books of Chronicles are desperately trying to paint a picture of a deeply masculine world that probably never existed, but that their writers desperately wanted to believe in. But they try so hard that, in the end, their butch male world tips over into something decidedly queerer.
Posted by Marika at 21:32