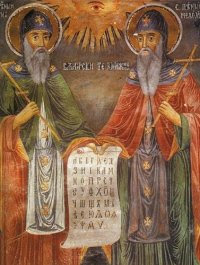 As you doubtless know, 14th February is an important day: it's the feast of Saints Cyril and Methodius. Cyril and Methodius were brothers, born in Thessalonika in the 820s. They became priests, and were living in a monastery on the Bosphorous, when some Khazars sent a request for someone to come and teach them about Christianity. The brothers set out, learnt the Khazar language, and set up a successful missionary enterprise. Next, they responded to a request from Moravia for Slavonic-speaking teachers, and off they both went. No one had ever written anything in Slavonic before so Cyril made up an alphabet, and they translated the gospels and various liturgical texts into their newly-invented script. They got in a bit of trouble for conducting services in the local language, and Pope Nicholas I summoned them to Rome for a telling off. Fortunately, he died before they got there, and his replacement, Adrian II, approved of what they were doing and made them both into bishops. Cyril died in Rome shortly after, but Methodius was made archbishop of the new Archdiocese of Moravia and Pannonia, and off he trundled, only to be locked up shortly after for being a heretic. He was set free after three years, but the spent the rest of his life being alternately condemned as a heretic and praised as a missionary, until he died, probably quite exhausted by it all, in 885.

Cyril and Methodius are (understandably) important saints in Slovenia and other bits of Eastern Europe, and the Cyrillic script was named after Cyril. There was also a radical political movement called the Cyril and Methodius Brotherhood, a secret society set up in Kiev in the 1840s which, inspired by Christian ideals, wanted to abolish serfdom, defend Slavic culture and traditions, educate the masses and set up a single nation to unite all the Slavic peoples. Good, eh? (Except maybe the last one: those projects tend to end badly).

Now, you may not care very much about Eastern Europe or the Slavs (shame on you); the translation of the Bible into local languages might not float your boat (heathen!); but the Feast of Cyril and Methodius has two things going for it which surely you can get behind: the rejection of Valentine's Day and the consumption of vodka. That's right, vodka: what could be more Slavic than potato-based liver poisoning? In the absence of any pre-existing Cyril and Methodius traditions (though do let me know if you find any), here are a few new ones that I would urge you to try:
- Gathering together (that's what church is all about, right?)
- Eating Russian food (or Slavic food, if you know what that is - I sure don't)
- Drinking vodka (Slavic, innit?)

You can even join the facebook group. So go on, ditch the valentines and party hard, Slav-style. It's what Cyril and Methodius would have wanted.
Posted by Marika at 12:46