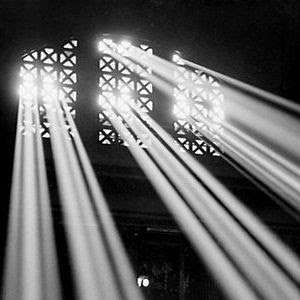 Also known as positive and negative theology, these are two different ways of dealing with theological language. Cataphatic theology is all about what we can say of God, what language and theological grammar is appropriate. Apophatic theology is all about the limitations of language: the way that human words fail to describe a God who is totally other, utterly beyond human comprehension.

Imagine you got crafty and made something, say one of those papier maché Tracy Islands they used to show you how to make on Blue Peter. And say that your little papier maché Tracy brothers started to try and speak about their creator. Their whole world is made of papier maché, and so they’d have to talk to you in terms of their world: our creator is like the glue that holds the island together. She is like the newspaper that is the ground of our being. She is like the paint that makes everything beautiful. And those things might say something true about you, but they wouldn’t capture the whole of your complexity, and they wouldn't be able to think of you except in terms of paint, glue and newspaper, which would be fairly inappropriate as a description of your essence.

And it’s worse than that for us: you and Tracy Island might have in common things like colour, solidity, and shape, but the problem for us is that all of the words we have are words that come from things that God made, and God is not one of the things that God made. God is not another thing in the world, so that if you took away God there would be one less thing, and so, while we can only talk of him in terms of things-in-the-world, we'll never really get what it means for God to be God.

Think of it another way. Have you ever tried looking at a word so long that it just seems like nonsense? Try this one: banana. Think about it. Eventually (or at least if your brain works like mine) it seems meaningless, because sooner or later you realise that there’s no real connection between the thing and the word we use to name it. It’s like that with God, only worse, because none of the words we have even come from God, they all come from our experience of things that God made and that aren’t God, so there’s a double disconnect.

God is so big that we can’t get our heads round the divine nature because there’s more of God than we can fit in our heads. God is so other than none of the words we have can be used to describe the thing that God is because they all come from the names for things that God is not. All of our language is creaturely, and God is not a creature. All of our language is finite, and God is not finite. And so, language fails: hence, apophatic theology, which is really about arriving at the point of theological silence. And the paradox here is that it’s only then, when we’re standing in the ruins of all our beautiful words, that we really see God, in what Dionysius the Areopagite calls ‘the brilliant darkness of a hidden silence.’

But the apophatic and the cataphatic shouldn’t be in a big fight with each other. It’s not (quite) like there are theologians in the blue corner shouting ‘We can talk about God!’ and theologians in the red corner shouting, ‘No we can’t!’ (or maybe just saying nothing, but looking disagreeable) Apophatic and cataphatic theology have to go together. If we just talk about what God is, we end up idolaters, thinking that the images we have created with our words are the same thing as God. And we can’t get to the apophatic without the cataphatic – it’s not until we’ve pushed language to its very extreme that we can really understand what it means for our words to fail. Denys Turner likens the apophatic to a lecturer’s embarrassed pause after he realises that he’s talked too much. The apophatic comes after language, not before it.

It’s not quite a healthy tension (aren’t they boring?) - it’s more that we need to do both to the extreme. Here, I think, is the perfect example of the interaction of the two: Thomas Aquinas dedicated years of his life to writing the Summa Theologiae, writing thousands of pages, asking, analysing and answering hundreds of questions and addressing thousands of objections. Then one day, he stopped, suddenly, refused to write any more, and when asked why, said, ‘It is all straw.’ And then he died.

Just read the word "cataphatic" for the first time today and when looking for a definition your post came up second on Google. I am very impressed by your writing. Don't take this wrong, but you look like a very young girl in your picture- and I am not used to reading such stuff from such people. Thanks for enlightening me on this topic. I once bought Aquinas and started in on reading him, but lost interest. Now, I think I'll try again- thanks!

Hello dear blogger, last week I had to go to a boring conference on the the importance of philosophy and its ramifications like negative theology in the world and I have to write a paper on that and I lack of ideas so I'm reading your blog to see if your knowledge can enlighten me.

Well, I hope you found it helpful.

Perhaps this is why John writes that Christ was the Word of God, made flesh and living among us. Jesus said that those who had seen him had seen the Father. What better way to reveal Himself - explain Himself - than through the incarnation. But even then, after looking upon him and allowing him entrance into our lives, there are those times where silence is the only appropriate form of worship. One of the most intriguing scriptures to me is Rev. 8:1... 'And when He broke the seventh seal, there was silence in heaven for about half an hour.'

This article seems to be oblivious to the incarnation, that the Son of God became one of us: "No one has ever seen God; the only God, who is at the Father's side, he has made him known" (John 1. 18). It is irrefutable that human beings are finite and therefore limited in our comprehension and explanation of the essence of who is the infinite God. But that is why God has revealed Himself in Jesus and Scripture. This article makes more of its bias than its subject, in my opinion.

Thank you for explaining the two words in a simplistic manner. You did a great job of bringing it down to Earth.

What I can honestly say, you have saved me a great deal of time as a psychologist.


Dear Marika, the Lord gave you the talent to explain in understandable ways and with humor. Bill, you really need a guide to read St. Thomas, for he presumes you know his interpretation of Aristotelian philosophy.