Theology and the Humanities 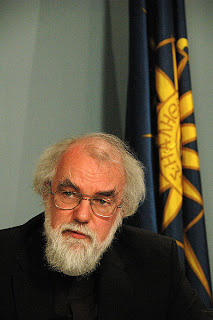 While I (clearly) have reservations about Kierkegaard, I have a total brain-crush on Rowan Williams. I don't want to jump him, I just want to sit and listen to him all day, to absorb his wisdom and admire his wizardy-beardy-gravitas. Happily for me, he came to Durham recently to do a talk, so I went along to listen. He was discussing the relationship between theology and the humanities, and this was the gist:

Mikhail Bakhtin (a Russian scholar) says that the exact sciences (biology, chemistry etc) are about basically about the knowledge of things that don't answer back. Texts, the subject of the humanities, are more complicated. They embody the stage someone has got to in conversation, they invite imaginative response from us. To read is to watch someone thinking and taking risks. Texts answer back, and we can never finish reading them. In David Lodge's Changing Places, there is a character called Professor Zapp, whose ambition is to write an exhaustive commentary on the works of Jane Austen, saying everything that there is to be said about her novels, not because he loves them but in order that, when he is finished, no one will ever have to read the bloody things again. This is not a good way to read.

Where does theology belong in the humanities? It is about the reading of texts, most importantly the Bible, which itself contains various readings and rereadings of the same events. Christianity is all about rereading: the New Testament rereads the Old, the Fathers reread the Bible, the Reformation rereads the Bible and the Fathers, and so on and so on. Revelation isn't about an end but about a beginning: it sets of the process of reading and rereading because behind the text of revelation is an abundant, inexhaustible, creative freedom.

Theology belongs with the humanities because it's about reading books, about conversation with a text that invites response. But is it just one way of reading amongst others? No. Because theology reads its text as coming from inexhaustible creative freedom, makes that freedom the basis of the whole sense of freedom which makes reading possible in the first place. We can only avoid the fate of Professor Zapp if we think that there's always something in the text that continues to escape us, that doesn't just come from ourselves.

Theology isn't just one of the humanities; it's in all of them, in their presuppositions about the necessary sense of freedom in the encounter with texts. Its task is, in part, to keep the humanities faithful to their task of endless rereading, which is grounded in God's nature as overflowing creativity whose identity can never be reduced to sameness. This affects how we see ourselves. Origen said that if we could fully understand ourselves, maybe we could understand God, but that's impossible because we too come from God's endlessness. We should always come to texts expecting to be changed, and the prayerful reading of Scripture is fundamental to what it means to be intelligent beings.

Theology is, among the humanities, the most extreme or concentrated form of humane reading. It should be held to account by the rest of the humanities if and when it tries to escape from its freedom. Theology's most fundamental insight is the doctrine of the image of God in humanity - it is in our elusiveness that we see what it means to be made in the image of God. In thinking about reading, we think about what it means to be human.
Posted by Marika at 10:53