Fear and Trembling is one of Kierkegaard's pseudonymous works. Its ‘author’ is ‘Johannes de Silentio’ - John of Silence, or, as we shall call him, Silent John.

Silent John opens by saying that it’s trendy to talk about going ‘beyond faith’ - that faith has become seen as something easy: everyone takes it for granted, and sees doubt as the starting point of real intellectual development. Silent John thinks that maybe there’s more to faith by that. He talks about a man he knows (this should probably be taken in the same way as the person who talks about ‘my friend has this problem...’) who is obsessed with the story of Abraham's sacrifice of Isaac; who read it over and over, understanding it less and less each time, and, rather than seeing faith as something to go beyond, saw it as a mysterious but desirable goal. 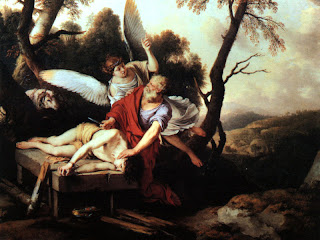 He tells the story of Abraham's sacrifice four different times, with four different versions of what happened. Abraham pretends that he’s a monster, so that Isaac doesn’t realise God told him to make the sacrifice, and so lose his faith. Abraham becomes silent after the event, can’t forget what God told him to do, and knows no more joy. Abraham repents of his sin in having been prepared to forget his parental duty and sacrifice his son. Isaac loses his faith.

'No one was as great as Abraham; who is able to understand him?’

Silent John says that Abraham is the exemplar of the life of faith, that his whole life was about understanding and living out faith. He lived for 130 years, but got no further than faith. He then goes on to examine the problems of the story of Abraham's sacrifice.

Why is Abraham a great man, a hero of faith, whereas anyone else who tried to kill his child would be seen as a monster? We talk as if understanding Hegel is a miracle (fair enough, I say), but understanding Abraham is easy peasy. If we can read the story of Abraham without losing sleep over it, we’re not reading it right. What made Abraham a man of faith is not just that he accepted God’s command – the move of infinite resignation – but that he had faith all along that God would restore Isaac to him.

Imagine this: a young man falls in love with a princess. His whole life is in this love, but it cannot be. He comes to realise this, and accepts it in the move of infinite resignation. He keeps his love young in his heart. There was a man who believed he’d made this movement, but then as years went on, the princess married a prince (Hello Regine!), and the young man was distraught, and realised he’d never made the move of resignation in the first place.

The knight of faith makes the movement of resignation, but then goes one step further and, by virtue of the absurd, is also sure that, in fact, he will possess the princess.

Silent John then asks three questions about the story of Abraham:

1. Is there a teleological suspension of the ethical?
This means ‘are the rules of ethics suspended in light of a higher principle? The ethical is the universal principle, and individuals sin by asserting their individuality against this universality. But faith is the paradox that the individual is higher than the universal. It’s not possible to have faith in paganism, because there’s no personal relationship with God and the ethical is equated straightforwardly with the divine. Faith privileges the individual’s relationship with God over universal ethics. (It’s hard not to see Kierkegaard's dumping of Regine here: I did an unethical thing in response to the call of God)

2. Is there an absolute duty to God?
The ethical, the universal, and the divine can’t be simply equated as Hegel tries to do. There is an absolute duty to God, in which the individual relates absolutely to the absolute, relativising the ethical. Because of this, what the individual does can’t be explained in terms of the universal: by their act of faith they put themselves outside of the universal, alone, lonely. Our decisions can’t be affirmed by anyone else or they’re back in the universal. We have to make the terrible decision of faith utterly alone.

3. Was it ethically defensible for Abraham to conceal his undertaking from Sarah, from Eliezer, and from Isaac?
Because the ethical is the universal, it is disclosed, out there in the open, accessible to everyone. Because faith goes beyond the universal, it can’t be explained in the universal, can’t be shared with anyone else. The hero of faith, unlike the tragic hero, is condemned to the terrible responsibility of utter solitude. He cannot speak.

Silent John ends by saying that to think we can go beyond previous generations, beyond faith, is foolishness. When children get bored of their games by lunchtime, does this mean they’re more advanced than the other children, or is it that they lack the ability to play well? Faith, says Silent John, is the highest goal of human life: many never attain it in the first place, and no one gets past it.
Posted by Marika at 16:37

Hi Marika, you might have missed it, but I left a reply to your latest comment and I hope you can find the time to reply. I appreciate reading your perspective.

I love Fear and Trembling. One of my favorite theological works of all time.